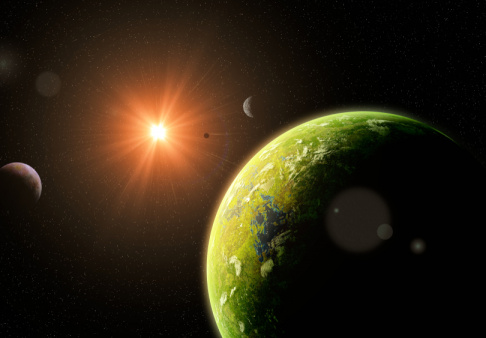 Since it was launched in 2009, the Kepler space telescope has been looking for small changes in the brightness of stars caused by planets moving in front of them

To date, astronomers have discovered 4,000 exoplanets, half of them by using the Kepler telescope. Kepler depends on its four reaction wheels to stabilize the spacecraft, allowing it to point in a specific direction.

However, in 2012, a reaction wheel failed. In 2013, a second one failed as well. Scientists continued gathering data, known as the K2 mission, but found fewer exoplanets than before, due to less precision and more noise. That resulted in an interesting possibility – if only the noise could be removed, more exoplanet signatures could be located. That is exactly the task Anne Dattilo and her colleagues at the University of Texas at Austin took on, creating a deep-learning neural network, AstroNet-K2. According to the researchers, the neural network speeds up the process of mining the K2 data. It has already located exoplanets missed by astronomers.

The neural network works the same way astronomers do: first, it extracts the light curves for each star, and then it looks at how much each curve changes over time. Because exoplanets are small in comparison to their parent star, a light curve with a variation of more than 3% is considered a binary star system.

Notably, the observed variation must be periodic to indicate an exoplanet. Single variations are ignored by the AstroNet-K2, eliminating a large percentage of false positives.

“AstroNet-K2 is highly successful at classifying exoplanets and false positives, with accuracy of 98% on our test set,” said Dattilo. Immediately after the AstroNet-K2 got busy with the K2 data, it noticed two exoplanets. Both were tracked by Kepler when Mars passed in its field of view, masking the exoplanet signatures because of its brightness. But unlike astronomers, the neural network was able to sift through the noise to locate two signatures: one of a “puffy” super-Earth-size planet that orbits a sun-like star every 12 day, and one of a rocky super-Earth orbiting a sun-like star every three days. The first has a surface temperature of about 750 degrees Celsius, and the second, 1,400 degrees Celsius.

Machine learning is advantageous in the hunt for exoplanets, as it does not succumb to human biases. AstroNet-K2 can study different regions of the galaxy in the same way, allowing astronomers to study the differences in exoplanet populations in those areas. Of course, as with any artificial intelligence, the neural network can only spot the exoplanet signatures it has been trained to recognize. If it spotted an interesting new phenomenon, it would discard it as irrelevant. For that reason, human oversight is still needed. “Humans are good at recognizing unusual signals that machines will misclassify or not recognize as interesting, which is crucial for discovering interesting and odd facets of the universe,” said Dattilo.