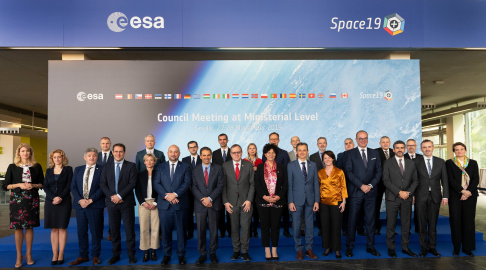 The European Space Agency (ESA) concluded its ministerial meeting in Seville, Spain, with good news – an approval of a budget of €12.5 billion ($13.8 billion) for the next three years, and €14.4 billion ($15.9 billion) over the next five years, respectively. This is the biggest budget the space agency has ever had

The ESA Director-General, Jan Wörner, remarked that the 22 member-states pledged more than the agency had proposed – and that the allocations were sufficient to fund all the programs the agency requested.

'Bringing together our member states, 22 governments that change regularly, and agreeing on such inspirational projects to share a joint future in space might seem an impossible task on paper. But in two days in Seville, we have proved it is possible,' he says. 'Together we have put in place a structure that sees inspiration, competitiveness and responsibility underpin our actions for the coming years, with ESA and Europe going beyond our previous achievements with challenging new missions and targets for growth along with the wider industry.'

ESA received a 10% boost for its scientific projects, which includes the study of gravitational waves to understand black holes and a planetary defense mission to intercept and study a comet.

Much of the funding will be dedicated to lunar exploration, including the Orion spacecraft, developed by NASA as part of the Artemis project to carry the first woman and the next man to the Moon in 2024.

In particular, ESA will build a service module that will provide propulsion, power, temperature control and air and water to the Orion crew module, marking the first time ever that NASA will rely on a European-built system for a US spacecraft. Orion is expected to make an uncrewed run at the end of 2020.

ESA is also focused on Mars, approving funding to send a rover and surface platform to the red planet as part of the Mars Sample Return mission, which will look for evidence of life on the Martian surface, among other things.

The space agency also plans to send more European astronauts to the International SpaceStation before 2024.

Although the funding boost is significant, ESA’s budget remains much smaller than that of NASA, which received an estimated $19.4 billion for 2019. By comparison, ESA’s budget for 2019 was approximately €5.72 billion($6.43 billion) in 2019. Still, with the new funding boost, ESA is establishing itself as a partner to NASA and a space agency that is vital for the Moon and Mars exploration missions of the coming decades.