Asgardia Has Become a Reality 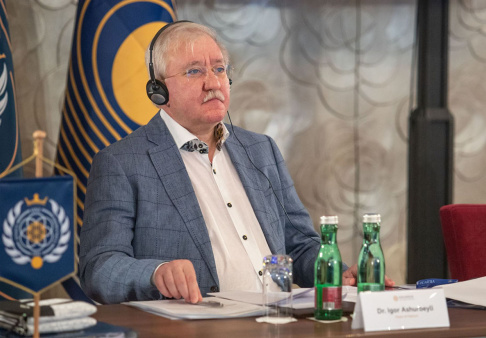 "Asgardia has become a reality”  - these words by Igor Ashurbeyli could become an epigraph for Day 3 of Asgardia Executive Congress. April 12 (Apr 18, 03) in Vienna Head of Nation and top Asgardian officials looked at the Congress’ results and shared their plans and dreams

In his very candid speech Chairman of Parliament Lembit Öpik said that “Asgardia changed the course of his life.” He first talked about the role of the first space state for humanity, and then elaborated on the Parliament’s achievements, as well as tasks it is facing. “The Earth is not flat, and it’s a disadvantage - we have time zones.”Mr. Öpik joked.  He stressed that time difference wasn’t keeping the Parliament from having weekly digital meetings, including the first ever digital Parliament and Government session.

When I was a politician in Britain, we constantly suspected rival parties to be playing against us. We don’t have doubts of this kind in Asgardia. We don’t have political parties that cause divisions among people, we have a situation where people unite. Yes, we have differences, but we share a common view of the future from our Head of Nation.

Prime Minister Ana Mercedes Diaz then took the floor, emphasizing that “building the first Space Nation is simply a blessing.”  She said that in the multicultural, multilingual, free, unified, multinational, independent full-fledged Asgardian Nation no one was limited to their earthly nationality, that discrimination, or any similar factors, had no place there, stating that this approach was one of the one Nation’s wonders, one of the aspects that constituted the ideal country man had always dreamed of.

Asgardia is not only writing its own history, Asgardia is making history - and it will change the course of humanity.  We are forging a new future in which the next generations will live in Earth orbit and on the Moon. As the Polish writer Stanislaw Lem said, ‘we do not want to conquer the cosmos, we only want to extend Earth to the edges of the cosmos.

Asgardia’s Superior Justice noted that a lot of work was still ahead, and, in planning and designing the judicial system, he intended to prevent imperfections that usually occured by shortcomings in legislation systems, like lack of clarity on responsibility of relevant institutions. He explained that it was the ultimate objective of the judicial system that all the Asgardian citizens could understand it.

I am pleased that our Nation has already the important judiciary branch which enjoys independent power. That means, the Asgardian judiciary exercise judicial power independently and free from intervention from administrative organs, legislative organs and individuals.

The closing note was done by the Head of Nation who listed scientific, technical, political and economic tasks Asgardia is facing. He said that even though Asgardia was a space nation, it had to be represented on the Earth. Today, Asgardia has headquarters in Vienna, as Austria is a neutral country that isn’t part of any military blocks. Thus, NGO Asgardia is registered there, but in the future, such NGOs must be set up on all of the six continents. They will be called Asgardia’s continental offices. The finishing phase of Argadia’s political construction is its fully legitimate UN membership.

Yesterday, one of the journalists began his question to me by asking, “When will Asgardia become a reality?..” I interrupted him right then. Asgardia IS already a reality. It’s really real. And this is confirmed by the Congress being attended by representatives of 20 of the world’s countries. That we have Parliamentarians from 42 countries, and Asgardians live in 200 different countries. I thank everyone of you for your faith in Asgardia. For the spark of hope for humanity to forever continue to live, and to procreate, in space, become a flame that never goes out.