Head of Nation: "It’s time for mankind to prepare to leave its native harbour" 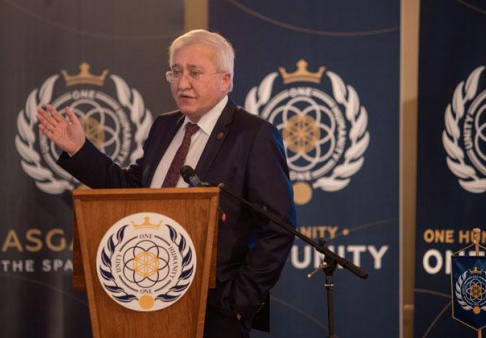 The Head of Nation addressed the assembled government and parliamentary officials at the historic Asgardia Executive Congress that took place in Vienna, Austria on April 10th-12th, 2019. Dr Igor Ashurbeyli spoke about Asgardia’s future goals and what groundwork had already been completed in reaching them

I understand this is the third day of the Сongress, and we’re all tired.

I, however, have to undertake the difficult task of being the last to speak before you. I’ll try not to be too tedious.

Let’s take a look at Asgardia’s key goals and their scientific, technological, political and economical aspects.
So, let’s begin with Asgardia’s key mission — the birth of the first human in space. 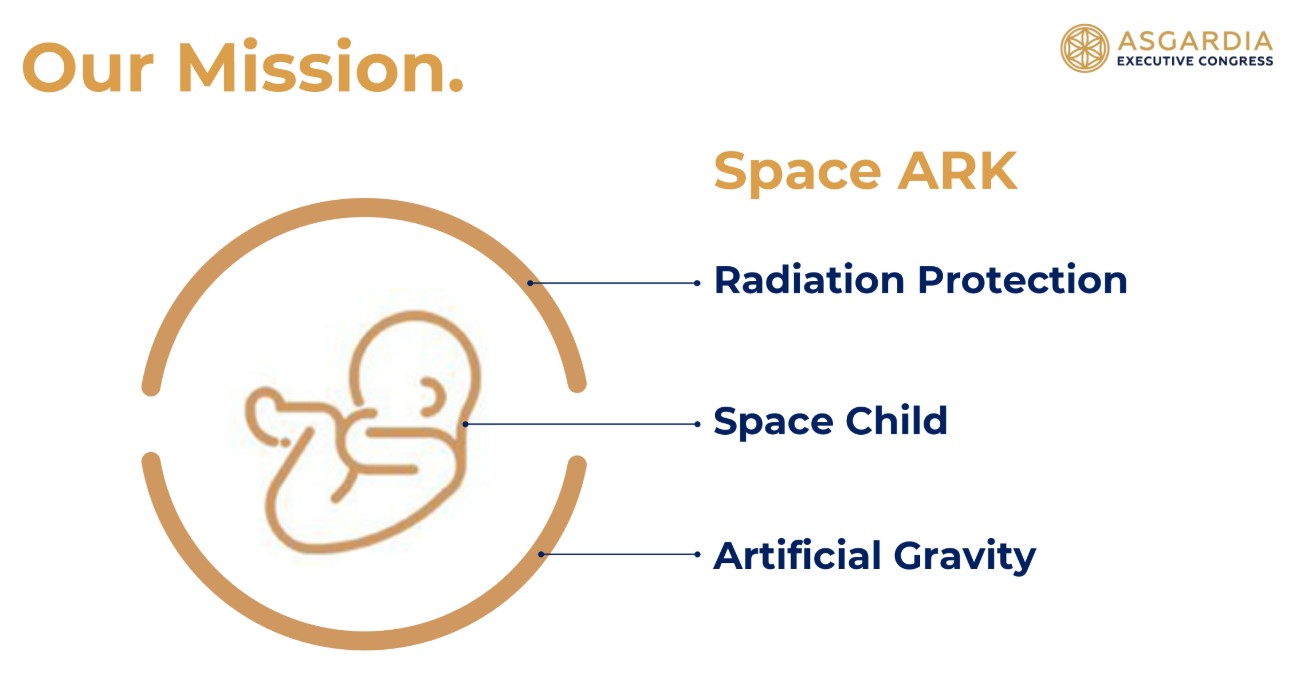 This particular fact will signify humanity’s chance to become independent from its home — the planet Earth — and a chance to continue the perpetual existence of mankind.  Spaceflight is very similar to seafaring, and it’s time for mankind to prepare to leave its native harbour and venture out to unknown shores.

For this, we need to solve two main issues, that can have the following symbolic representation: artificial gravity, the symbolic lower hemisphere, and protection from space radiation, the symbolic upper hemisphere, that together form a Space Ark, similarly to Noah’s Ark.

Asgardia’s space module on the ISS could become its first iteration. An independent Asgardian Ark with artificial gravity in Earth orbit would be the second. Next — an Ark in сislunar orbit. And, finally, this Space Ark should become a starship, capable of carrying a large number of people over decades.

In general, Asgardia’s infrastructure could be divided into the following categories: terrestrial, in-Earth orbit, in cislunar orbit, lunar, and stellar. Ground infrastructure would primarily comprise spaceports, launchers, manufacturing, mission control centers, and personal means of communication. In-Earth orbit  — of a low-orbit global internet satellite constellation that does not require ground stations, a high orbital constellation of satellites securing the functionality of a digital state, Space Arks and a Space Fleet. In cislunar — of a satellite group and Space Arks. Stellar infrastructure would constitute a starship based on Space Arks. 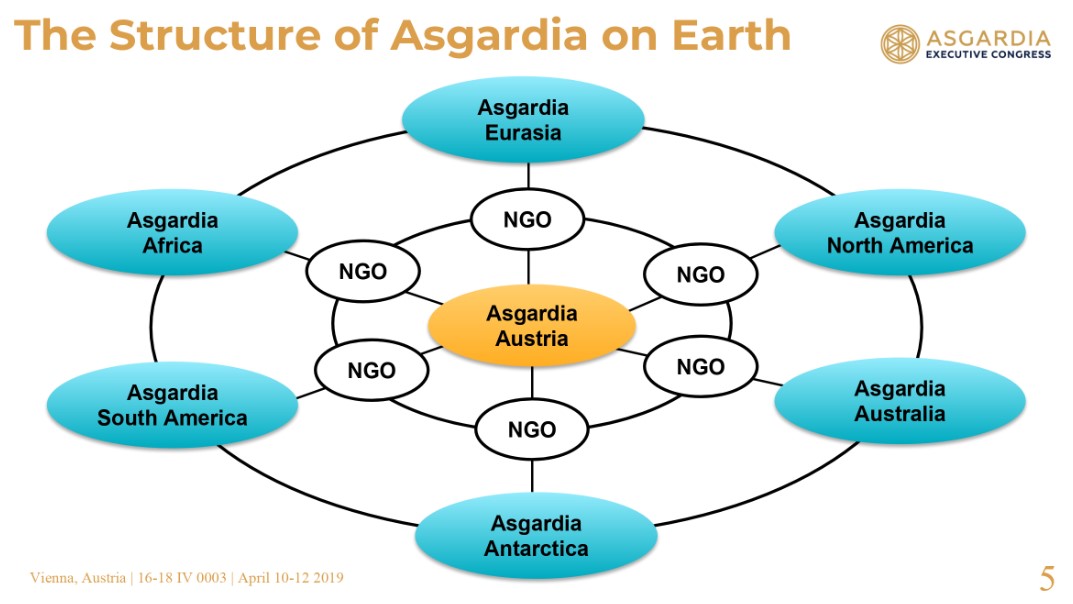 Now, let’s talk about the political aspects of Asgardia’s development.

Asgardia is a Space Nation, however, for now, it’s based on Earth, and needs to have Earthly missions. Now, Asgardia’s Headquarters are located in Vienna, since Austria is a neutral nation, not a member of any of the Earth's military blocks, and home to the UN Office for Outer Space Affairs. We have registered our first non-profit NGO ‘Asgardia’ in accordance with Austrian law. We will set up NGOs just like it on all six Earth continents — Eurasia, North and South Americas, Africa, Australia and Antarctica. These will become continental missions.

Further, we will create subcontinental and national missions. They will operate in accordance with master agreements with Asgardian communities in the form of associations, without forming legal entities. Following the recognition of Asgardia by the Earth’s countries, these missions will transform into embassies and consulates. 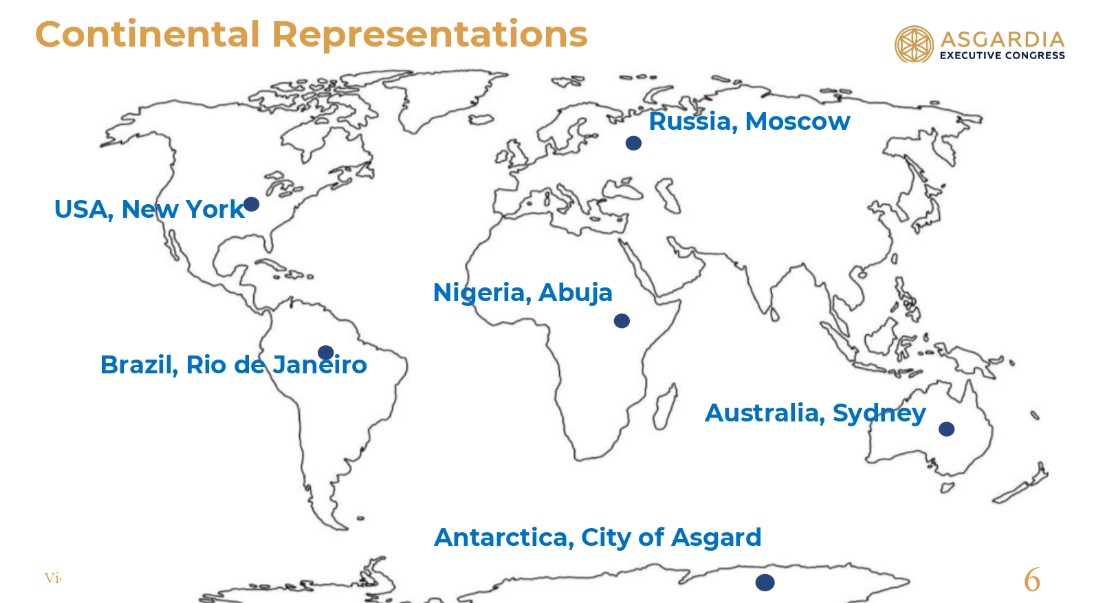 On the structure of Asgardian population and social lifts.

Social lifts and a career ladder are provided not only due to status upgrades, but also, due to budget allocation in accordance with hierarchy terms, delegation or managerial, as well as business responsibilities, as well as creation of continental and subcontinental parliaments, governments, and courts.

Argadia’s strength in both its internal, and Earth's, markets, must be Asgardian’s quality as a subject of market relations. For this, we introduce the term ‘positive selection.’ 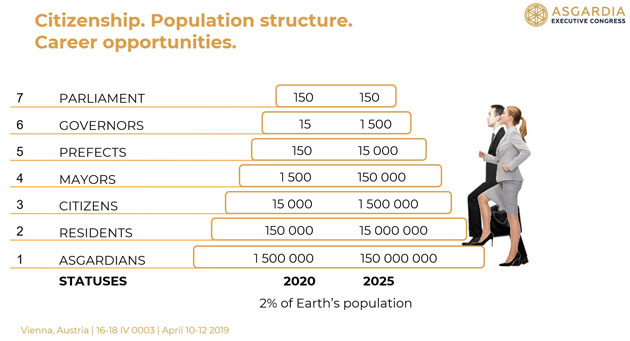 The concluding phase of Asgardia’s political construction must be full UN membership.

Asgardia’s economy has yet to stabilize. Current income from resident fee payments don’t cover current spendings, which affects my family budget - as well as yours, until you start getting paid accordingly. That’s why our main task in terms of economy is to achieve a fully balanced budget in Asgardia by 2020.

The general approach to Asgardia’s economic development will be as follows:

Seven global investors of the first wave also get stakes in Asgardia AG and seats in Asgardia’s Supreme Space Council. 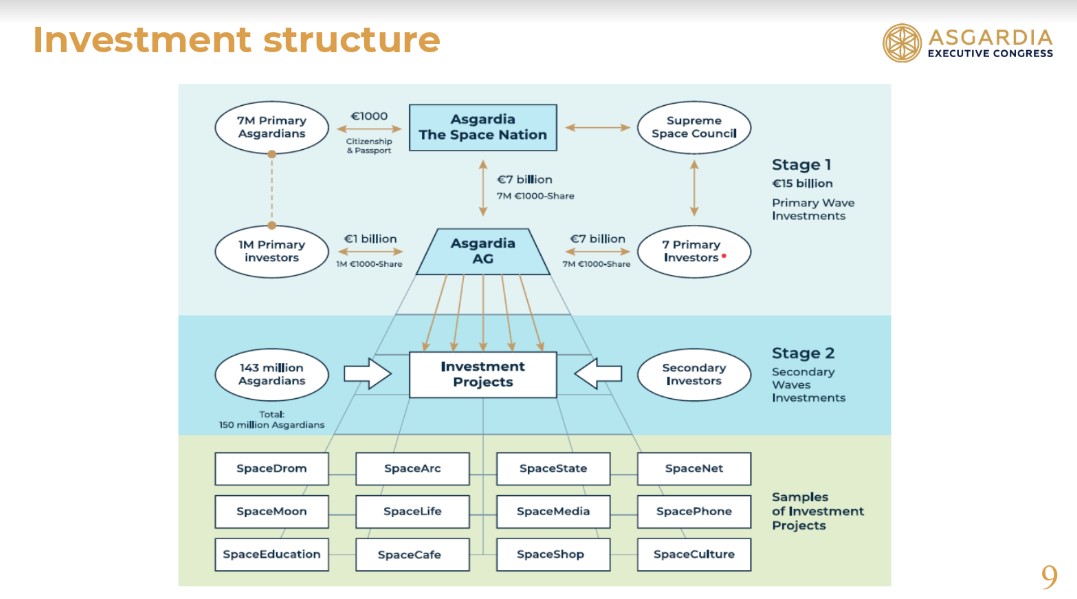 Citizens who join Asgardia later, as well as second-wave investors, will have the opportunity of participating in investment projects of their choice. The range will be rather wide — from global projects, like a spaceport or Lunar settlements, to local franchises such as space cafes or space shops. In addition to investment projects, traditional tax levies, banking operations, a full range of public services, transactions in the domestic market for digital goods and services — and much more — will be Asgardia's sources of income. Setting up a National Bank and, possibly, a stock exchange, is also up ahead.

And a few words in conclusion.

Yesterday, a journalist addressed a question to me saying ‘so, after Asgardia becomes a reality…’ I interrupted him right there, and replied, ‘Asgardia has already become a reality’. It has indeed! I don’t know what awaits Asgardia down the road, but today, by the very fact that we are all here — earthlings from 10 different countries, MPs from 42 countries, and Asgardians from 200 countries — we are living proof that Asgardia is a reality. I thank all of you for believing in Asgardia. Now, let’s make sure that the spark of hope for mankind’s continued existence and procreation in the endless Universe burns bright, and never goes out.