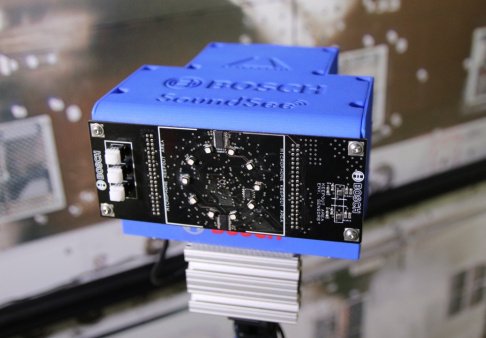 Global tech giant Bosch is launching a new sensor system powered by artificial intelligence to the International Space Station. Colloquially referred to as the ‘SoundSee’, it is the size of a lunch box, and can potentially change how astronauts and ground control monitor ISS’s operations

The SoundSee module is equipped with microphones and uses machine learning to pick up and analyze the sounds it hears. It can establish a baseline, and then continually compare new audio to be able to immediately pinpoint potential mechanical issues that could cause problems. It will also eventually provide information about the current performance of the ISS systems, and when specific systems need maintenance or repair.

‘Machines, such as motors and pumps, emit noise signatures while they operate,’ DrSamarjit Das, SoundSee project lead at Bosch, said in the company’s press release. ‘Our SoundSee AI (artificial intelligence) algorithm uses machine learning to analyze these subtle acoustic clues and determine whether a machine, or even a single component of a machine, needs to be repaired or replaced.’

The sensor system will be installed on the Astrobee, becoming the autonomous floating robot’s ear, in a way. The eventual goal for the 1-foot cube-shaped bots is to take over some mundane activities, allowing astronauts to focus on their work. SoundSee shares Astrobee’s goal of automating tasks the crews have to perform manually. The device has undergone significant testing in a simulated environment on Earth, but the real use scenario will come when it’s aboard the ISS.

SoundSee will launch to the ISS on November 2 as part of Northrop Grumman’s CRS-12 resupply mission.