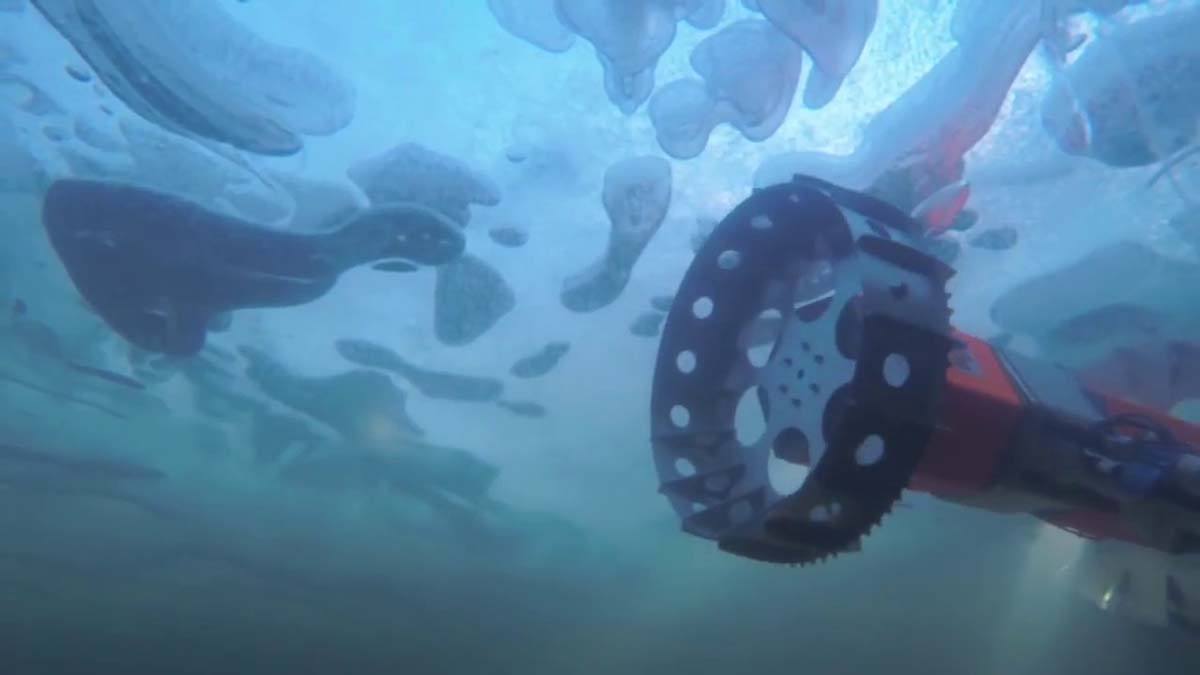 NASA's Jet Propulsion Laboratory in Pasadena, California has been developing a BRUIE robot for underwater explorations of icy moons, but before sending it to roll on extraterrestrial worlds, the robot is being tested in Australia's Casey research station in Antarctica

Icy Moons in our Solar System are believed to be the best candidates for astrobiology researches. Jupiter's moon Europa and Saturn's moon Enceladus are covered with icy crusts that may hide oceans beneath them. Scientists assume that these alien worlds may host primitive forms of life, not unlike Earth in its early days.

Still, there’s no evidence of any organisms inhabiting these icy moons. To stop guessing, we need to send an explorer able to navigate solo through the oceans while trapped under icy crusts that could be 10 to 19 kilometers thick.

‘The ice shells covering these distant oceans serve as a window into the oceans below, and the chemistry of the ice could help feed life within those oceans. Here on Earth, the ice covering our polar oceans serves a similar role, and our team is particularly interested in what is happening where the water meets the ice,’ says Kevin Hand, JPL lead scientist on the BRUIE project.

Antarctica is the best place on Earth to mimic icy moon oceans, so it’s the best place to test BRUIE. The robot will be placed in the water through drilled holes in the ice, the team will then remotely navigate the rover. It’s not the first field test for the robot: it has already experienced the icy cold of arctic lakes near Barrow, Alaska.

BRUIE stands for Buoyant Rover for Under-Ice Exploration. The aquatic explorer is 1 meter long and features two wheels to roll beneath the ice. The underwater rover can capture images and collect data about the area where liquid water meets the icy crust.

Why explore the water-ice area, and not go deeper?

‘We've found that life often lives at interfaces, both the sea bottom and the ice-water interface at the top. Most submersibles have a challenging time investigating this area, as ocean currents might cause them to crash, or they would waste too much power maintaining position,’ says lead engineer Andy Klesh. ‘BRUIE, however, uses buoyancy to remain anchored against the ice and is impervious to most currents. In addition, it can safely power down, turning on only when it needs to take a measurement, so that it can spend months observing the under-ice environment.’

The explorer will be equipped with a number of scientific instruments to measure parameters related to life, like dissolved oxygen, water salinity, pressure and temperature. The underwater rover also features two live, high-definition cameras.

It still might be tricky to find life on an alien world, even if it’s swimming right in front of you: ‘Once we get there,’ said mechanical engineer Dan Berisford. ‘We only really know how to detect life similar to that on Earth. So it's possible that very different microbes might be difficult to recognize.’

Still, developers have time to figure it out and come up with necessary adjustments. The interplanetary mission to Europa is set for a launch in 2025. Europa Clipper is an orbiter that will study the icy moon via a series of flybys.

As for Enceladus, which attracted major attention of scientists due to recently discovered signs of hydrothermal activity and organic compounds in its subsurface ocean, there’s still no mission scheduled to explore this promising alien world.