Can a Helicopter Fly Without Air? 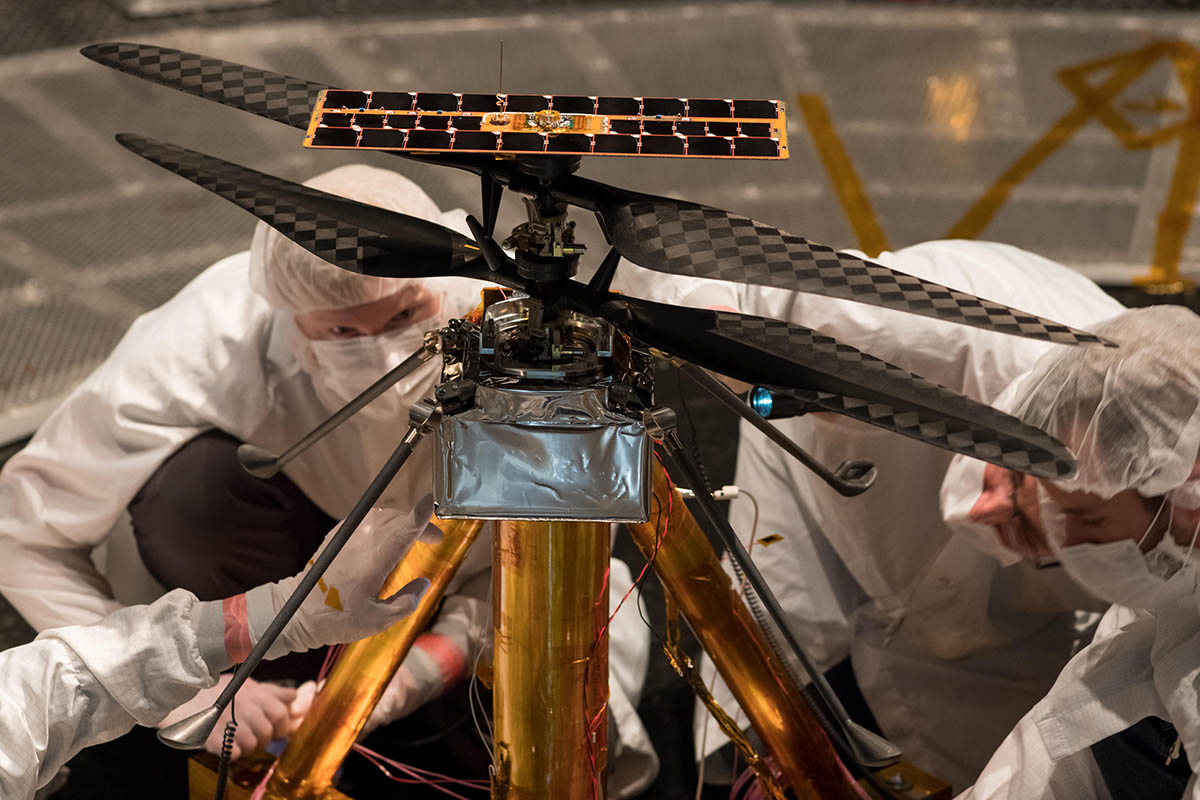 Mars' atmosphere is less than 1% of the volume of Earth's atmosphere, which means Mars doesn't have a lot of air. And one thing that air does is helping helicopters fly. It might seem that flying a helicopter on Mars would be impossible, but NASA is setting out to prove that it can happen

In July 2020, NASA will launch its new Mars 2020 rover, which will come equipped with the Mars Helicopter, a miniature robotic aircraft. The experimental helicopter, which is being tested for the last time, weighs under 4 pounds (1.8 kilograms) with blades that are approximately 4 feet (1.2 meters) long. The team behind it hopes that it will achieve the first-ever flight of a heavier-than-air aircraft on Mars.

This Mars-copter has been in the works for years now. Bob Balaram, the project's chief engineer at NASA's Jet Propulsion Laboratory near Pasadena, California, explained all the technical challenges in an email to How Stuff Works.

He wrote, "A helicopter for Mars has to be tough enough to survive the journey to Mars (high g-loads, vibration, etc.) and the environmental conditions it will face in space and upon arrival (nighttime cold, etc.). The design of such a vehicle also has to address the unique aerodynamics in the thin Martian atmosphere, which imposes challenging weight constraints on the vehicle design. It has been possible to meet these stringent mass constraints only recently, with the advent of lightweight electronics (e.g. cell-phone components), and battery technology (e.g. Lithium Ion cells)."

The Mars helicopter will need to achieve lift at more than twice the maximum height that helicopters have reached on Earth so the Mars helicopter's blades will spin at 2,300-2,900 revolutions per minute, which is approximately ten times faster than helicopters on our planet.

However, the Mars helicopter must go beyond achieving lift. It also needs to survive the extreme cold of Mars' night temperatures, which can get as low as minus 100 degrees Fahrenheit (minus 73 degrees Celsius), as per Space.com. Plus, the copter needs to be recharging, which it will do using a built-in solar panel. Lastly, due to the lag time for transmitting electronic instructions from Earth, it will need to use onboard sensors instead of being controlled by a human with a joystick from Earth.

The copter to be attached to the Mars 2020 craft was made to prove that flying on Mars is possible. The main goal is not to perform scientific research. However, if all goes well, future helicopters will be bigger and able to perform more analysis.

Balaram stated that "the particular design chosen for the tech demonstrator (counter-rotating coaxial rotors) was to maximize performance for the available space on the Mars 2020 rover. Next generation science helicopters would use multi-rotor configurations with payload capability in the 0.5 to 2 kilogram (1.1 to 4.4 pounds) range. Vehicles’ sizes could typically be in the 20 to 30 kilogram (44 to 66 pounds) range. The main constraint would be to package the rotor blades and overall system into a configuration compatible with lander designs for Mars."

Aircraft like helicopters could be instrumental on future Mars missions, especially if they're launched alongside robotic rovers.

In another email to How Stuff Works by Dave Lavery, program executive for solar system exploration in NASA's Planetary Science Division, said, "In particular, they are well-suited to taking cameras, sensors, and other instruments into terrains that are too extreme or unstable for surface rovers — high-angle slopes, cliffsides, very rough boulder-strewn terrain, extremely soft soils, etc. Flying platforms can also enable the use of sensors across relatively large areas of terrain that would be prohibitively time-consuming for a rover, or eventually, a human, to cover, such as obtaining detailed scans of 100-acre (40-hectare) tracts on the Martian surface. They will also be useful for carrying small payloads, such as deploying small instruments throughout an area of science interest or retrieving samples and returning them to a central repository for analysis."