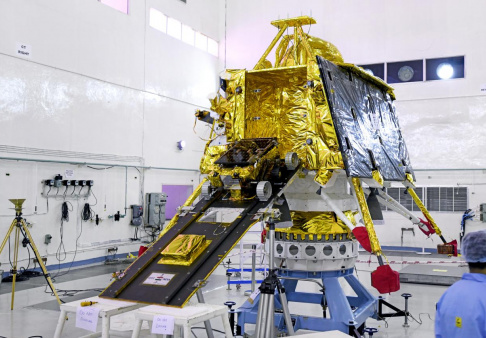 ISRO just released a 3D image of one of the Moon's craters taken by Chandrayaan 2's Moon orbiting payload. Besides, India's space organization has also published the topographic mapping data collected with the help of Terrain Mapping Camera 2 (TMC 2)

TMC 2 bases its work on TMC aboard Chandrayaan 1's. ISRO said in a statement today that the 0.4μm to 0.85μm, 5m spatial resolution stereo triplets (fore, nadir and aft views) TMC 2 took from a 100 km orbit are prep images for Digital Elevation Model (DEM) of the entire surface of the Moon.

ISROtweeted about it Wednesday, November 13, 2019

#ISRO
Have a look of 3D view of a crater imaged by TMC-2 of #Chandrayaan2. TMC-2 provides images at 5m spatial resolution & stereo triplets (fore, nadir and aft views) for preparing DEM of the complete lunar surface.

The images reveal impactor-created craters, lava tubes that could serve as the future Moon colony, wrinkle ridges in Mare regions, showing cooling and contraction of basaltic lava, structural dislocations on the lunar surface, and lunar domes.

The Vikram lander released from the Indian mission Chandrayaan-2 was seconds away from making a soft landing on the Moon’s South Pole, never visited by a spacecraft from Earth before, but the lander deviated from its trajectory. Its connection with mission control was lost, and that was it.