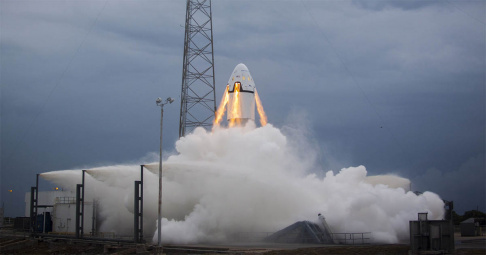 SpaceX successfully completed a ground test of the emergency abort system for Crew Dragon, its Commercial Crew Program shuttle. Now the company will prepare to do a flight test, after which it will be ready to transport astronauts in 2020

Yesterday’s test ignited the SuperDraco engines that are part of the emergency abort system, aimed to getting astronauts to safety, should problems arise during launch. If the Falcon 9 rocket, on which the Crew Dragon will launch, fails mid-air, the emergency escape engines will take over and carry the capsule that contains the astronauts to safety, followed by a parachute landing.

This is good news for SpaceX, which suffered a blow in April when a test capsule exploded after the engines had been ignited. An investigation, which is now closed, revealed a faulty valve that caused engine propellant to make its way into other systems.

Today’s success means SpaceX is well on its way to flying people – but the next big test must also go smoothly. In the coming months, SpaceX will test the emergency abort engines mid-flight. In 2015, the company aced a pad abort test, igniting the engines while the Crew Dragon was on a launch pad. In the upcoming test, the same thing will happen on the actual Falcon 9 rocket. The company also recently performed extensive parachute testing at NASA’s request.

In March, SpaceX sent an uncrewed Crew Dragon to the ISS. Should the next test go well, two astronauts – Bob Behnken and Doug Hurley – will travel to the ISS and back. After that, SpaceX will receive the Commercial Crew Program certification for flying crews regularly to the ISS.

So far it looks like the Crew Dragon could fly in early 2020, but because both SpaceX and competitor Boeing had faced so many unpredictable delays, don’t hold your breath just yet.

'If something comes up that we didn’t know, then it could be longer than that,' NASA administrator Jim Bridenstine said during a recent visit to SpaceX. 'Regardless of whether we make it in the first part of next year is less relevant than the fact that we will make it.'