Dr. Mark Shelhamer: ‘Space is a Nasty Place For Humans, Many Things Can Go Wrong’ 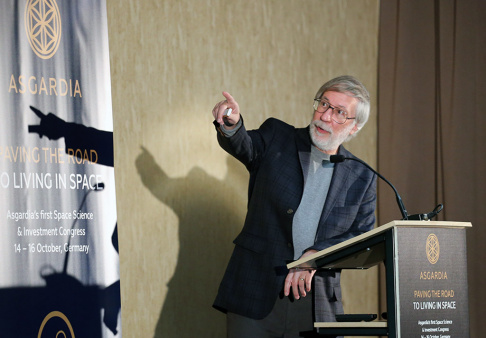 Today, on the final day of the Asgardia's first Space Science and Investment Congress, Dr. Mark Shelhamer, Former Chief Scientist of the NASA Human Research Program talked about  physiological aspects of human in space as well as psychological effects on physiological changes

‘Astronauts, cosmonauts, these are tough people, these are not people who are used to getting a lot of help doing anything, yet when they land nominally after 6 months on the space station in most cases they have to literally be lifted out of the Soyuz space craft’ said Shelhamer ‘As far as we know, we are not going to have this kind of assistance when we send people on the Moon or Mars’

Bone mineral density problem was mentioned by the speaker, however, he noted that currently used countermeasures proved to be effective, and some astronauts even returned to Earth with improved bone density. How so? Not every astronaut performs so many exercises before the flight, but when an astronaut lives on the ISS the routine must be performed every day. However, Shelhamer noticed that today scientists don’t have a valid connection between bone density and bone strength, due to the lack of epidemiology among such small group of healthy people like astronauts.

The sensory motor issue was addressed by the scientist. Gravity provides static orientation and dynamic movement information terrestrially. Without it alterations in eye-head-hand control, posture and locomotion appear. But after gravity transitions, the sensory motor system adapts to altered sensor inputs. After returning to Earth’s gravity after a 6-month mission, large changes are seen in the performance of the astronaut due to the altered central integration of sensory input.

Intracranial pressure was the next problem the speaker talked about. Because of the shift of fluids towards the head, astronaut have puffy faces, stuffed sinuses and their taste sensation decreases. Intracranial pressure alters with astronaut’s optic nerves and pushes on the back on the eyeball. But the eye problem isn’t the one to worry Shelhamer, the fact that this could be just the beginning of indication of more extensive neural damage is.

‘Are we going to see a bigger problem as we extend the flights?’ asks Shelhamer.

Psychological issues were next on the line. Even if stress is compensated and does not affect performance, it may produce adverse physiological changes, for example in immune function. Speaker refers to the study published in 2014 by Jack Stuster. Astronauts participating in the experiment were asked to write a journal on the computer, sharing anything they had on their minds. The journalists were sent to a secure server and the program extracted the keywords that corresponded to various psychological issues. According to the study, at the second quarter of the 6-month mission conflicts among the crew are at it minimum, but during the second half of the mission there are much more conflicts detected between the crew members. Group interaction positivity was also studied and it monotonically is going down during the mission. Stress rating among astronauts is also growing thought the whole mission. The question is: if we make the mission longer, will the astronauts continue to like each other less every day? What if it is a 5-year-long mission?

‘Space is a nasty place for humans, many things can go wrong, medical event, physiological events, psychological events. A lot is expected from astronauts, they have to work at peak performance in the challenging environment. Especially on Mars missions or more extensive missions there are going to be largely on their own’ states the speaker.

‘What we really need here, in addition to the disciplinary expertise in all the individual areas that many of us [speakers] have talked about this week, what we really need is a systematic scientific approach to understanding the interactions not only between the physiological areas but between the physiology, the psychology and the larger mission plan’ concluded Dr. Mark Shelhamer.