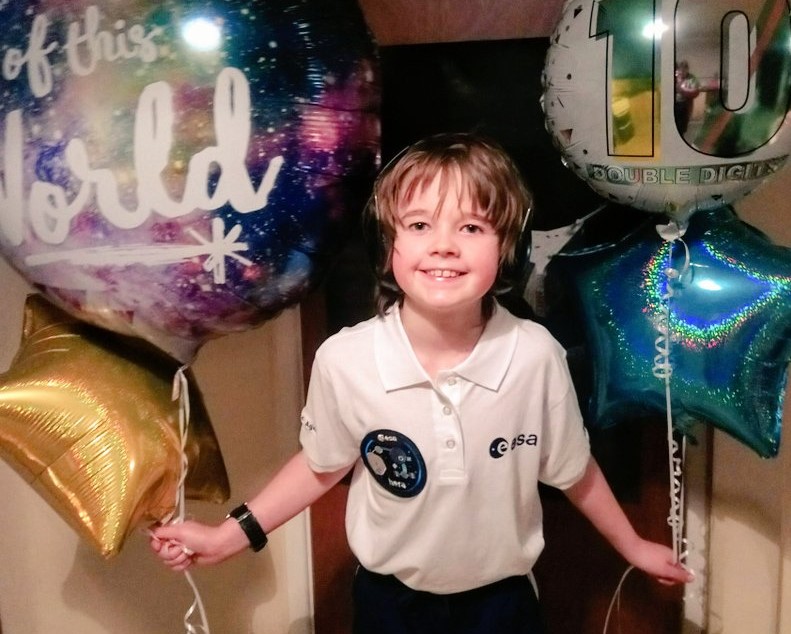 If you were suddenly speechless, what would be the cause? And how long do you think you could stay that way? An Irish boy who turned 10 on December 1 never said a word... until December 2015, when he saw on TV his hero astronaut Tim Peake fly off into space. Not only has the kid been talking since then – he was named ESA's youngest Planetary Defense Ambassador!

'Tim's away,' said Hayden Geraghty, after echoing the countdown and shouting 'blast off!' as he watched the broadcast of Peake launching to the ISS from the Baikonur cosmodrome.

His mother, Caroline Geraghty, writer for Astronomy Ireland, said, as she recalled her son's defining, life-changing moment: 'He spoke – and I was speechless. He’d made noises and grunts before but had never spoken a full sentence... We knew he knew the words, something just wasn’t clicking.'

She explained that from that moment the boy who had never shown any interest in space before, became 'obsessed with learning about the different planets and astronomy' (and became his own mom's colleague, getting his own column on the children's pages at Astronomy Ireland!)

Happy birthday to @AstronomyIRL ‘s youngest correspondent and an inspiration to us all. Have a great day Hayden. 👩‍🚀 🛰 https://t.co/IYdjk5xT1V

Hayden, who, along with ADHD, has autism, is now an avid space enthusiast deeply concerned with asteroid threat and is campaigning to protect our Earth, for which he earned his title of the youngest Planetary Defence Ambassador ESA has had to date.

Caroline used to think autism was going to limit her son's life choices - but it seems to broaden them, giving him a unique path to walk by.

She refers to her son as 'our little superstar,' saying she's very proud of his goals as well as his success. And, indeed, support from famous people like Olivia Newton John (musician), Keira Knightley (film star) and Peter Egan (actor best known for his work in Downtown Abbey) is no small thing.

Hayden has by now met in person with some of those he's looking up to – for example, physicist Brian Cox.

And he often talks to astronaut Tim Peake on Twitter – the man who accidentally got him to talk. Or was it accidental?

Maybe, it was written in the stars. Bright stars that shine on Hayden's future and light his way as he lives in a world where he can talk, dream, and make a difference for humanity.