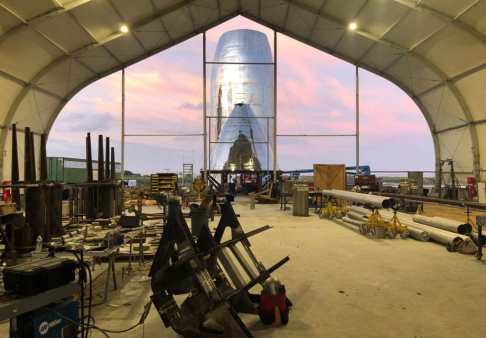 The images show Starship Mk1’s assembly in Texas. Musk posted two photos of the assembly in progress with joking captions referring to Area 51 and the Star Wars movies. Meanwhile, Starship Mk2 is being developed at SpaceX’s facilities in Florida.

The final version of the starship will have six Raptor engines, and will be reusable, along with the Super Heavy. According to the company’s plans, it will eventually fly missions to Mars.

Musk expects the Mk1’s assembly to be completed in the next 10 days: he is scheduled to provide a Starship design update at the company’s Texas facilities on September 28.

SpaceX representatives say that fully operational flights of the Starship could happen as early as 2021. 2023 is the target for sending billionaire Yusaku Maezawa on a flight around the moon.

In the meantime, the world is staying tuned: the first test lights for Mk1 could take place as early as October, with the initial experiment reaching an altitude of more than 19,000 meters.