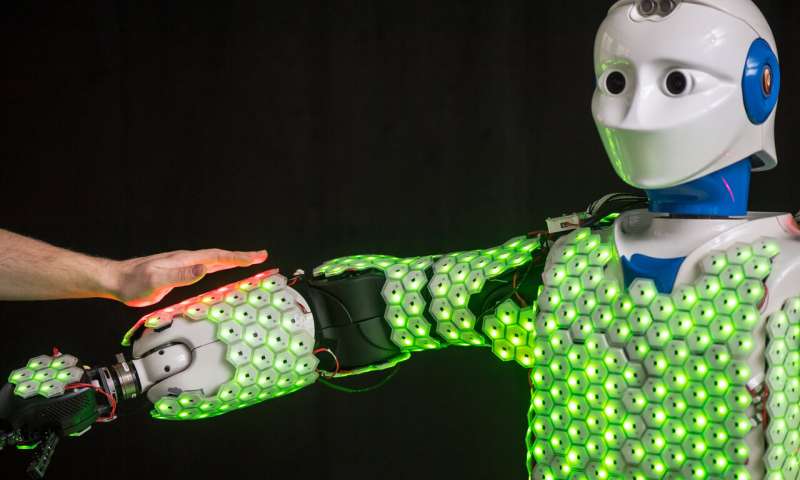 A team of engineers at the Technical University of Munich (TUM) equipped an autonomous anthropomorphic robot with full-body artificial skin. The newly designed system combines the skin with specially developed control algorithms.

Inspired, as usual, by biological systems, the artificial skin designed by the team consists of hexagonal cells about the size of 2,5 centimeters in diameter. Every skin cell is made of rigid elements and can sense temperatures, pressure, accelerations and proximity. Each cell is equipped with a microcontroller for local computation and reading of the sensors, as well as providing communication between its neighbors.

Development of the robot skin was launched back in 2010, and later evolved into a newer generation. The major challenge the team had to face during their work was the calibration of the distributed sensors and handling such large amounts of data.

Any system can be easily overloaded with so much information coming from numerous sensors. The team managed to find a solution: engineers decided not to monitor the cells permanently, but rather make individual cells transmit data only when values are changed. Such trick reduced the processing effort by 90%.

Once again, the solution was looked up in ordinary biology. For instance, you feel a T-shirt when you put it on, but later get used to the sensation of the fabric touching your skin. And there’s no need to notice you have a T-shirt on every second, even though it’s good to be sure you are dressed, especially if you’re in public.

Another obstacle was mounting a large number of skin cells on a robot, since the resulting system had to be reliable, simple to deploy, easy to maintain and, above all, interfere as little as possible with the robot movements. Therefore, it was decided to connect different patches of the skin by special fixing studs, connected to each other with elastics.

The team demonstrated the abilities of their invention on 3 different robots.

And last but not least, anthropomorphic robot H-1 had its whole body covered with the artificial skin. H-1 was wearing 1260 cells in 47 skin patches with more than 13000 sensors. The artificial skin covered the robot’s torso, arms, legs and even the soles of its feet. The last one gave the machine the ability to feel uneven floor surfaces and balance on one leg.

Such a sensitive robot can more than just move safely. This helps the machine to safely operate near people and gives them the ability to anticipate and actively avoid accidents.

‘This might not be as important in industrial applications, but in areas such as nursing care, robots must be designed for very close contact with people,’ says the team leader Prof. Gordon Cheng.

Another great advantage of a sensitive robot is that it can hug you and you shouldn’t worry about broken ribs, this guy is very gentle!