First UAE Astronaut All Set to Launch From Baikonur 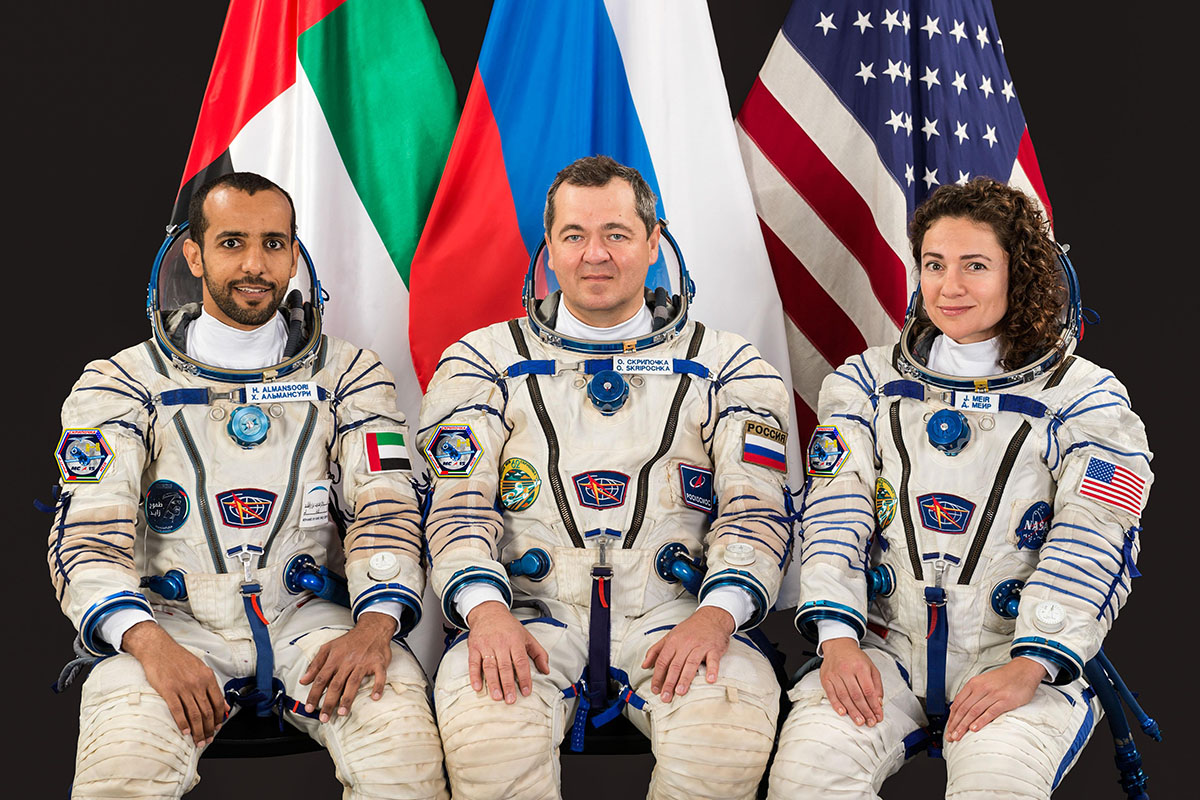 Tomorrow, September 25, 2019, at 5:56 pm UAE time, the first Emirati astronaut Hazza al Mansouri, will launch to the International Space Station together with Russian Commander Oleg Skripochka and NASA astronaut Jessica Meir aboard Soyuz MS-15 from Baikonur in Kazakhstan, making the UAE the 19th country to visit the ISS, and becoming the 240th astronaut — and the first Arab — aboard the station.

Al Mansouri will carry 10 kg of cargo with him (courtesy of Mohammed bin Rashid Space Centre, MBRSC) related to the UAE’s heritage, culture and history, including a 1976 photo of UAE Founding Father Sheikh Zayed with a delegation of Apollo astronauts, a copy of My Story by Sheikh Mohammed bin Rashid, and MBRSC’s book The Race to Space, his country’s logos and flags, and Emirati food he will serve to his colleagues on board.

He’s bringing 30 Al Ghaf tree seeds to plant in celebration of the year of tolerance (the Ghaf tree branch is the logo), and the three winning entries of MBRSC’s Send to Space poetry, stories and paintings contest.

During his eight days on the ISS, UAE’s first astronaut will conduct 16 scientific experiments. Six of them will be performed in microgravity, with results to be then compared with those of the same test held on Earth.

He will use VR glasses to experience the perception of time and speed in microgravity, and the reactions of his body to space conditions will be studied as well. The other experiments will include learning how microgravity affects cell growth, micro-organisms and genes, seed germination, fungi, algae, and how bacteria respond to antibiotics.

Al Mansouri will conduct a live video tour of the ISS for Arabic viewers, as well as document life on the ISS all of his eight days there.

Both Al Mansouri and Al Neyadi underwent a thorough training in the Star City in the Moscow region, and at the European Astronaut Centre in Cologne, Germany.

The Russian Soyuz MS 15 that will take Hazza Al Mansouri and his colleagues to the ISS consists of three parts: an orbital unit, landing unit,, and a propulsion unit.

For Sultan Al Neyadi, the back-up astronaut, the mission will be concluded once the launch with Al Mansouri on board takes place. However, both the UAE astronauts have already turned an important page in their country’s, and the world’s, history.

'We are proud of being representatives of our homeland on the ISS and raising the UAE flag onboard,' they said, explaining they were 'reaping the fruit planted by late Sheikh Zayed bin Sultan Al Nahyan when he received foreign cosmonauts; the Founding Father was then getting the nation geared for a brighter future, and now we are following in his footsteps.'