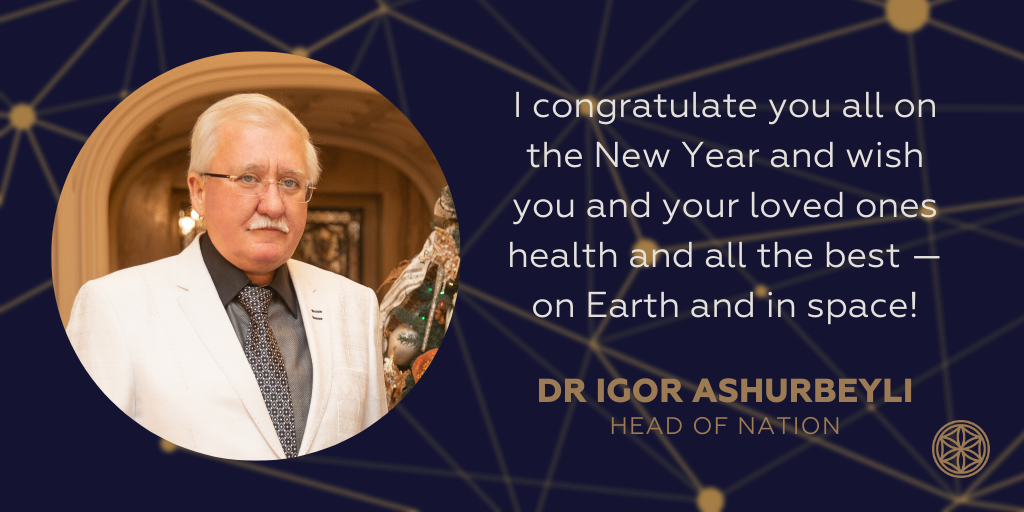 Dr Ashurbeyli sends his personal warm regards to each Asgardian at the end of the year 0003 (2019):

'I congratulate you all on the Year Day and wish you and your loved ones health and all the best — on Earth and in space!'

'In the New Year, celebrated at different moments in different time zones across the globe, it is customary to make a wish for the future. Let's think of something good and cherished now. After all, we think differently than most, we are a Space Nation, people of the future.'

'We want the first child to be born in space in less than a quarter of a century, proving to everyone that human possibilities are as limitless as space itself, that humanity is immortal. I wonder who they will be and what they will become — this first space human,' the Head of Nation elaborates on Asgardia's plans for the future of humanity.

The year 0003 (2019) was a big one for the First Space Nation, and Dr Ashurbeyli looks back on Asgardia's achievements: 'In the three years of our Space Nation’s existence, we have already done more than any other nation in the world has done in such a period. We launched our first satellite and thus gained our territory in Space, endorsed the Constitution and elected the Head of Nation, elected the Parliament, formed the Government and Court. We have a Flag, a Coat of Arms, a National Anthem and a Motto: "One humanity – one unity". We already have more than 1 million people from 200 countries.'

The Head of Nation also reminds Asgardians of the importance of our community: 'Asgardians! Each of you is important to us! Fill out your profiles, add photos so that we can proudly show on the main pages of our site who we are — Asgardians. Become full-fledged residents of Asgardia, mayors, and grow our community with us! This way, you can help form an independent national budget for Asgardia and enjoy all the privileges of residents in elections of mayors, prefects, governors, representatives at the continental, sub-continental and country levels, members of Parliament and Government.'

In the end of the day, or the year, it's the people who form a Nation: 'Our residents are people who make history: they are building the world's first democratic Space Nation, where everyone can realize their talents and dreams!'

We here at Asgardia Space News extend the Head of Nation's wishes to all Asgardians and Residents, future and present. We're happy to see you with us and are excited to watch our community grow even more.