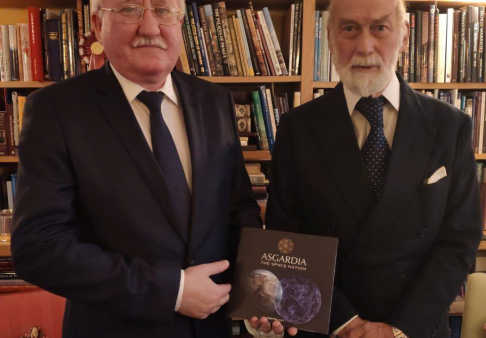 Head of Nation and Prince Michael have known each other over 15 years through friendship and collaboration. The Prince is the Patron of the Russo-British Chamber of Commerce, and Igor Ashurbeyli is its golden member.

At the meeting, Igor Ashurbeyli spoke of the first space kingdom, Asgardia, and suggested creating a World Council of Royal Dynasties on Earth. Today, the world counts 32 monarchs in power; 12 in Europe alone.

Asgadia, according to its Constitution, is not merely the first space state, but also, the first space kingdom. The Head of the Nation was inaugurated June 25, 2018 in the Royal castle of Hofburg, the winter residence of the Austrian Habsburgs. As a monarchy, it is essential for Asgardia to establish relations with conventional Earthen royal dynasties.

Married to a Catholic, Prince Michael has no claims for the British throne. However, he remains one of the closest relatives - first cousin - of the Earth’s oldest living monarch, Queen Elizabeth II.  Besides, the Prince’s family are related to the former Romanov dynasty; he was named after Grand Duke Mikhail Alexandrovich, Emperor Nicholas’ II younger brother.