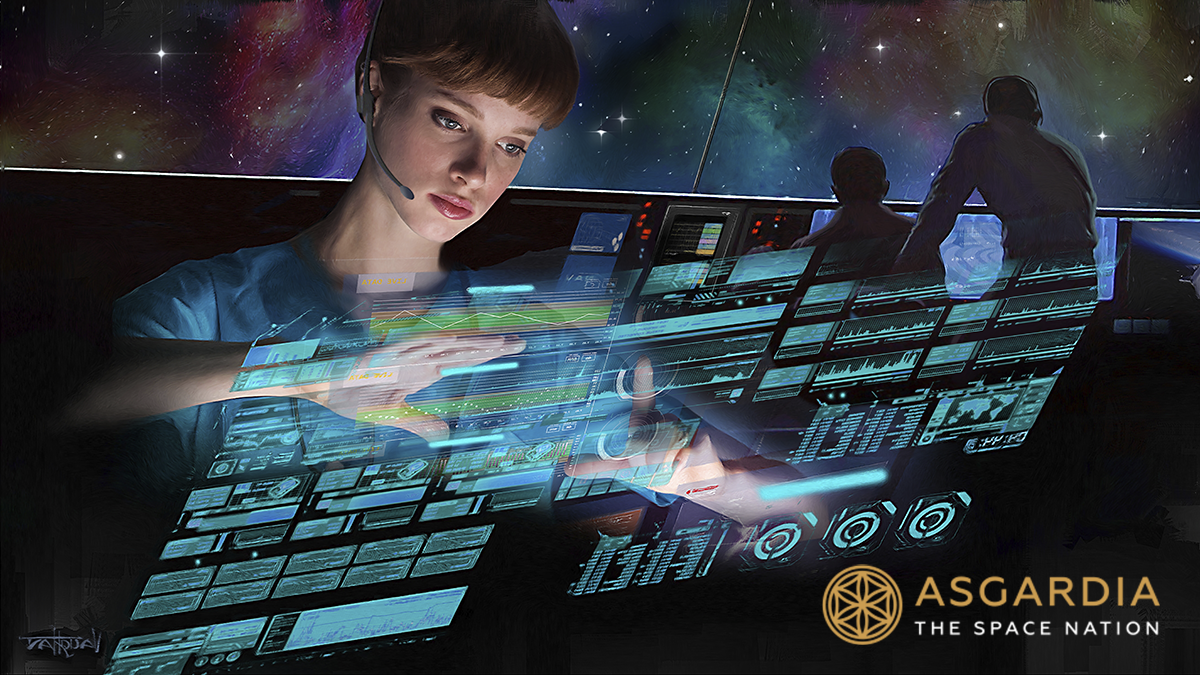 Parliamentary sittings are multi-day meetings where Asgardian Members of Parliament come together to discuss, debate and vote on the Nation’s legislation in ‘sessions.’ These events are vital for the development of the nation.

In this roundup, we’re going to share some of the highlights from this groundbreaking digital session. In this sitting, which took place from 11 - 13 Virgo 0003 (26th-28th July 2019) a series of key firsts and decisions were taken. Highlights included:

1. Parliament’s most digital sitting to date

For months now, Asgardia’s Parliament has been pushing the boundaries of Digital Democracy to become a world leader in the adoption of remote conferencing technology for political purposes.

Digital Sittings are complex technical undertakings. Until now, technicians, translators and administrators have come together in a physical location to ensure that everything runs smoothly - and that translation services can be provided seamlessly.

This sitting was Parliament’s most complete digital sitting to date. People from 42 countries all over the globe connected to participate from their homes and offices, rather than meeting up in a physical location.

The Chairman of Parliament, Lembit Öpik, highlighted this as an important advance for the Space Nation. He stated that ‘Asgardia’s systems have to be developed with the future in mind. One of Asgardia’s goals is to have habitats in space. As a result, it will be important to have systems through which people can connect, irrespective of their physical location - be that in space or on Earth.’

Mr Öpik also said that he felt that ‘Parliament has started to mature and develop a strong digital culture of respect and professionalism. This is a central contributing factor to the success of Asgardia as a digital democracy.’

2. The first use of Asgardia’s new voting system

In keeping with the theme of pushing the boundaries of Digital Democracy - This Sitting was also the first time Asgardia’s Parliament has officially used its new Voting System.

Asgardia’s democracy needs to be taken seriously. One way to ensure this is to put an extremely robust electronic voting system in place. The new Voting System features multiple security features, including powerful DDOS protection, multiple backup servers and redundancies.

In addition to the security features, the voting system also ensures that the votes are logged and that members of Parliament can’t change or tamper with votes after they are locked in. This new technology represents an important investment in the creation of a reliable, fair and transparent voting system.

3. Six agenda items were voted on

One of the principal reasons for the Digital Sittings is for members of Parliament to officially register for voting. During the Sitting, parliament needs to reach a quorum - the minimum number of members required for the votes to be considered legal. To reach a quorum, 50%+1 of the Parliament must be present - any less than that and it would not represent a majority of Parliament and the votes couldn’t pass.

This sitting was comfortably quorate and there were six items on the agenda that required voting on. While Parliament has already been debating the agenda items in their regular sessions, the Sitting also provided a chance for debate and discussion on the agenda items.

The items up for vote were as follows:

All these items were approved.

While the votes have always been recorded for verification and posterity, for the first time, all the votes from the Digital Sitting will be made visible - including the outcome of each Parliamentarian’s vote: ‘Yes,’ ‘No,’ or ‘Abstain.’ This is something that Parliament voted for in a previous sitting in a bid to improve transparency. It is expected that once the voting has been completed, counted and verified by the Counting Commission, the votes will also be shared with the general Asgardian public.

5. Changes to the calendar

One of the hotly debated topics was the Asgardian Calendar. The calendar was recently changed and given a glossy new interface and tools, including the DateTime format, that allows people to more easily determine the Asgardian date.

However, several members of Parliament - including those from the Science Committee who are working on developing the concept of an Asgardian calendar - were not convinced that the changes should be accepted at this time. They claimed a series of  unresolved technical questions need first to be addressed and encouraged their peers to vote ‘no’ - on this occasion - to push the decision back to the October sitting so that more time could be given to debate the decision.

One of the items brought up in Parliament during this Sitting was a discussion lead by Citizenship Committee Chair, Ben Dell, who revealed that testing was underway on an eCommerce solution that would sell Asgardian-branded goods. This is a long-anticipated facility, desired by the Asgardian public,  who have been hungry to represent themselves as Asgardians.

Mr. Dell explained that the store was a prototype. The main purpose was to test how, in practice, Asgardian businesses would be able to operate and interface with both Asgardian law, and the law of the land that they live in. This has been a question that several committees are investigating. It is vital to ensure that Asgardia and its citizens are compliant with their terrestrial nation’s laws.

Mr Dell also said that during this early testing phase, as the store is being run, developed and funded by an external company, 20% of the net revenue from each sale will be paid directly to Asgardia. During these early tests, the store has already helped to generate some income for the nation.

Once the system is able to be handed over to Asgardia, and when Asgardia has the capability and capacity to take it over, 100% of the profits will go towards funding Asgardia.

This means that Residents and Followers could be able to support Asgardian apparel, drink out of Asgardia branded mugs and fly the Asgardian flag in the very near future all to the benefit of Asgardia.

The Prime Minister gave a keynote speech to Parliament. Prime Minister Diaz outlined and reaffirmed the goals of the nation. Ms Diaz highlighted the two paths that Asgardia has to walk at the same time: the Nation’s internal and external functions. This means the outward expansion of the nation and internal strengthening and development of our identity as a nation.

The Prime Minister also stated that the nation is taking the right steps towards recognition. She is working to get bilateral recognition from international organisations and aims to establish Asgardia’s status with several international activities. These, she explained, would be the best first steps before reaching out to the UN. She cited Asgardia’s new relationship with the Mexican Space Agency as a good example of this evolving process of recognition.

Ms Diaz also spoke about the good work that was being done between Parliament and Government. She stated her belief that improvements could be made to further improve this interface, adding “The Government, through its ministers, is in a very good position to listen to Parliamentary recommendations.” As part of her involvement in the Sitting, the Prime Minister also responded to questions from Parliamentarians.

Encouraging words ended the Prime Minister’s speech: “I am convinced that the Government and the Parliament together will make Asgardia the Nation that we are all dreaming of.”

Parliament had invited Ministers from Asgardia’s Government body to attend the sitting to answer questions and give updates on what they had been working on to help Asgardia reach its goals.

The following ministers were in attendance and made presentations to Parliament:

Ministers also responded to questions. The interaction between Government and Parliament was helpful in clarifying the relationship.

In an update from the Information and Communication Committee, Chairman Dennis Shoemaker reported work on the proposal for a ‘Digital Space Library.’ This will be accessible by Asgardians. This landmark project will generate a body of knowledge and literature for the nation. The proposal is with the Justice Committee for its final checks - to ensure that it is compliant with the Constitution. After this step, it will be ready to be added to the next Parliamentary agenda for consideration.

10. Asgardia made bold decisions about its drive towards financial independence

Much of the discussion taking place during the Sitting was on the subject of funding the nation. It was a common theme, understood by Parliament and Government, that in order to start providing valuable services to Asgardia’s residents - and to further develop the nation -  the nation needs to start developing its economy.

There was a lot of discussion on how Asgardia could start to generate income, including the collection of Citizenship fees and licensing agreements with other companies. One of the most interesting of these proposals for Citizens was the substantial progress that is being made towards allowing residents to establish businesses of their own within the Space Nation.

John Fine, Committee Chairman for the Trade and Commerce Committee, reported that he was working on a litany of legislative proposals to help empower the development of Business in Asgardia including:

The Chairman of the Manufacturing Committee, Fernando Jimenez Motte, reported that his Committee was working on a proposal to create “AIS” - The Asgardia Institute of Standards - to ensure that Asgardia was going to have exacting standards.

11. The complexity of legislating in Asgardia was considered

Creating laws, collecting revenues, selling goods and otherwise engaging in businesses with other countries means that Asgardia needs to create legislation that is both fit for Asgardia, and also takes into account the fact we have to follow the regulations of the host nation in which we’re doing business.

With Asgardians all over the world, this is an important element to get right as the nation could already commence global business dealings with over 100 countries.