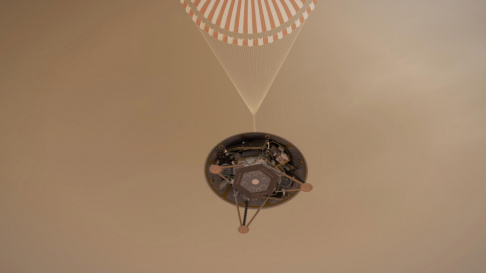 After six months of travel covering more than 480 million kilometres, the $1 billion joint US-European mission’s lander is scheduled to touch down on Monday, 26 November.

Although this is not the first time a NASA rover touches ground on Mars, InSight’s objectives are quite different from its predecessor, the Curiosity rover, which landed on the red planet in 2012.

Unlike Curiosity, which has been exploring Mars by moving around the planet, Insight will stay in one place for the two years of its mission. Its objective: to dig deep into the planet’s interior. In fact, InSight is an acronym for Interior Exploration using Seismic Investigations, Geodesy and Heat Transport.

In a new scientific development, the lander’s 1.8-meter arm will remove two main instruments and place them on the planet’s surface. The first experiment will take the temperature of the red planet by drilling five meters into the planet. No one has drilled to this depth before – it was last done almost 50 years ago by the Apollo mission, who drilled down to 2.5 meters. InSight will else use seismometers to measure for potential marsquakes.

The second experiment will measure the wobble of the planet, which will help scientists analyse how the pull of the sun and the moons affect Mars’s core.

According to NASA, InSight is truly unprecedented as an exploration tool. "It's got its own brain", said lead scientist Bruce Banerdt of Nasa's Jet Propulsion Laboratory. "It's got an arm that can manipulate things around. It can listen with its seismometer. It can feel things with the pressure sensors and the temperature sensors. It pulls its own power out of the sun."

Much to the disappointment of those in search of extraterrestrial life, InSight will purposefully look for signs of past or present life. However, it may still find clues.

"When InSight drills down into the Martian soil, we'll learn more about how Mars and Earth formed”, Bill Nye, CEO of the nonprofit Planetary Society, said in a statement.

“We'll know more about where we all came from, and why these two rocky worlds are so similar yet so different. We may learn more about what kinds of planets can harbour life. InSight is more than a Mars mission -- it's a solar system mission."

InSight stands to "revolutionise the way we think about the inside of the planet", said Nasa's science mission chief, Thomas Zurbuchen. Because Mars is not as active as Earth in terms of its geology, its interior has been preserved in time.

To avoid the risk of tipping over and sabotaging the entire mission, a large, flat area known as Elysium Planitia has been chosen as the probe’s landing sight. Once in place, it will take up a space akin to the size of a large car. While it sounds simple, the success rate of landing on Mars is currently around 40%.

Just two years ago, a European lander came in two fast and suffered a failure in its descent system, crashing on the surface on Mars and carving out a crater.

"It's all about location, location, location", said Tom Hoffman, InSight’s project manager. "And for the first time ever, the evaluation for a Mars landing site had to consider what lay below the surface of Mars. We needed not just a safe place to land, but also a workspace that's penetrable by our 16-foot-long (5-meter) heat-flow probe".

The process of landing will take seven minutes, between the lander’s release from spacecraft at the top of Mars’ atmosphere until its touch down. Weighing 350 kgs and encased in a capsule that will protect it from the heat reaching 1,500C, it will travel down at a supersonic speed of 19,800 kph. It will then be slowed down by a series of engine firings and a nylon parachute.

“There's a reason engineers call landing on Mars 'seven minutes of terror'", Rob Grover, InSight's entry, descent and landing (EDL) lead, based at NASA's Jet Propulsion Laboratory in Pasadena, California, said in a statement. "We can't joystick the landing, so we have to rely on the commands we pre-program into the spacecraft. We've spent years testing our plans, learning from other Mars landings and studying all the conditions Mars can throw at us. And we're going to stay vigilant till InSight settles into its home in the Elysium Planitia region."

After touch down, the lander will communicate with a tone beacon that the radio telescopes should be able to detect.

Of course, plenty of things could go wrong: wind gusts could affect the descent; the parachute can become tangeld; a dust storm can inhibit the lander’s abilite to use solar power. "You never know what Mars is going to do," said Hoffman. "Just because we've done it before doesn't mean we're not nervous and excited about doing it again."

InSight also comes equipped with two experimental CubeSat satellites, which will remain in perpetual orbit around the Sun. They will provide near-live updates of the lander’s descent.

Even if the mission is successful, people on Earth will have to be patient: while the first images of the landing site will come almost immediately, it will take at least 2.5 months for the scientific instruments to be fully deployed, and a few more weeks for the digging into Mars to begin. However, after the mission ends in two years, the hope is that we’ll know a lot more about the fourth planet from the Sun.