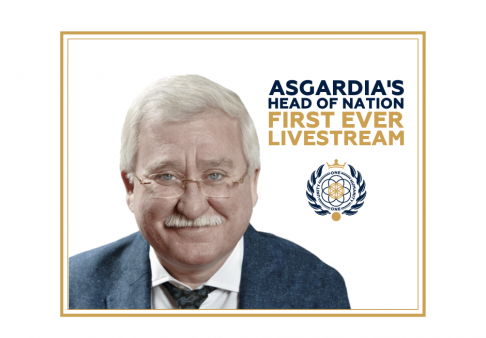 This livestream is meant to establish a strong connection between Asgardians and their Head of Nation. Anyone from the First Space Nation is invited to start a conversation with Dr. Igor Ashurbeyli.

The Head of Nation will provide answers to questions asked by Residents and Asgardians from all around the globe. Dr. Ashurbeyli will discuss the most exciting topics, provide his insight, and share his point of view with the nation.

Why the event is unique?

When heads of earthly nations address their residents, they usually do it in their own language. As you know, Dr. Ashurbeyli is from Russia and one of the most internationally understood languages in the world is currently English. So why don’t we just translate the livestream into English and broadcast it in one language?

Well, Asgardia is about a multi-lingual international community. Asgardians come from all parts of the world, and we want each and every one of them to have an opportunity to start a conversation.

That’s why tomorrow the first ever livestream will be synchronously translated in 8 different languages! Head of Nation will speak in Russian, while a huge team of translators will be working non-stop to accurately convey his speech into English, Chinese, Turkish, Spanish, Italian, German, French and Portuguese.

No one ever did this in YouTube. Broadcasting the event in 9 different languages at the same time is a very complicated process. But despite the organizational difficulties, we find it essential to have the Asgardians involved into the discussion despite their knowledge of English.

Of course, these 9 languages can’t cover all the native languages Asgardians speak. Our team conducted an analysis to reveal the most common languages in our broad international community. After the live broadcast, we will gladly translate the event into other languages based on the requests from the members of our community.

Fun fact: An Asgardian will be translating Dr. Ashurbeyli’s speech into English. Daniil Zemlyanoy, a translator from Russia, is a member of our community for 2 years now!

Until today, we’ve received almost 2000 requests addressed to the Head of Nation. Our team has processed these questions and translated them.

During the stream our multi-lingual team will be collecting the questions asked in the YouTube chat and pass them to Dr. Ashurbeyli.

Tomorrow is the day you will get the answers to the most exciting topics brought by our community!

Don’t miss it! Join the discussion on our YouTube channel tomorrow!