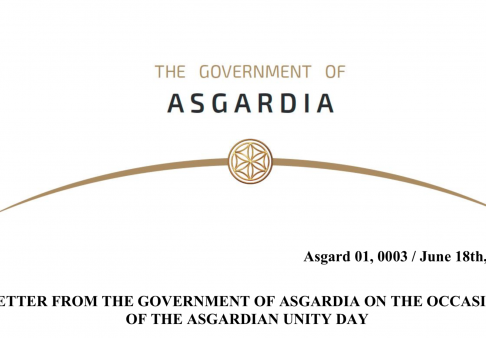 Two years ago on a day like today, thousands of Asgardians around the world joined us and took part in a historic event: the first national vote for the adoption of our Declaration of Unity, and the publication of the solemn Constitution of Asgardia.

At that moment we began the journey of an unknown path, but prodigious and promising. The Declaration of Unity sets out the principles on which our Nation is based: freedom, equality, respect for laws and human rights. A whole set of precepts designed so that, through our Constitution, Asgardia stands as a unified and free space State.

Today, with an already formed Government, we celebrate the values that unite us as Asgardians and inspired this wonderful creation: belonging to a unique community without distinction of race, origin, language, religion, citizenship or residence, with humanity as a unifying factor. It is a new society that bears peace, in which partisan and political interests have no place.

Our Head of the Nation, Igor Ashurbeyli, conceived this idea with the fixed gaze in the achievement of the birth of human beings in space as the true conquest of humanity. That is where our actions are directed, and as a government we will be in charge of creating an ideal world so that these newborns in the space era have the right environment for their development, that wonderful habitat in which our citizens can live, in which Asgardian families can form their homes, reach their goals, seek new horizons and opportunities.

Therefore, as a government, we will forge the bases for the construction of that habitat in which the future generations of the Asgardian civilization will live; we will promote the great achievements of humanity in the service of the space society in order to reach the highest levels of modernity and technology ever seen, and in this way, create the right conditions at all levels, which will make the birth of human beings in space possible.

This is a day to remember the Supreme Values that identify us and unite us as Asgardians, foundations of our society and of the Nation that we are building: the struggle of humanity towards the infinite future, the search and maintenance of peace in space and peaceful settlement in it, equal opportunities for all Asgardian citizens, the safeguarding of all humanity, the unity of this as a community, respect for human dignity, their rights and freedoms, the development of individuals, the pursuit of the happiness ofvthe human being, respect to life, love, and family, as well as the propagation of the  human species in other universes.
All this under the observance of the laws of Asgardia and the preservation of the space environment as the habitat in which all the Asgardians will live together.

It will be a new world in which, as on a canvas, the scientific, artistic creativity, work, knowledge and all the unlimited potential of human reason — within the margins of respect and morality —  will be shaped for the enjoyment of all humanity and the harmonious existence of our citizens.
You are part of this, thank you for believing in us and contributing to the materialization of this majestic dream.

Letter from the Government of Asgardia on the occasion of the Asgardian Unity Day, 1 Asgard 0003 (18 June 2019)

News of the Government. Appointment of Acting Minister of Finance.

An update on Ministries from Prime Minister Ana Mercedes Diaz