Lost in Translation: What Did Yutu-2 Rover Actually Find on the Far Side of the Moon? 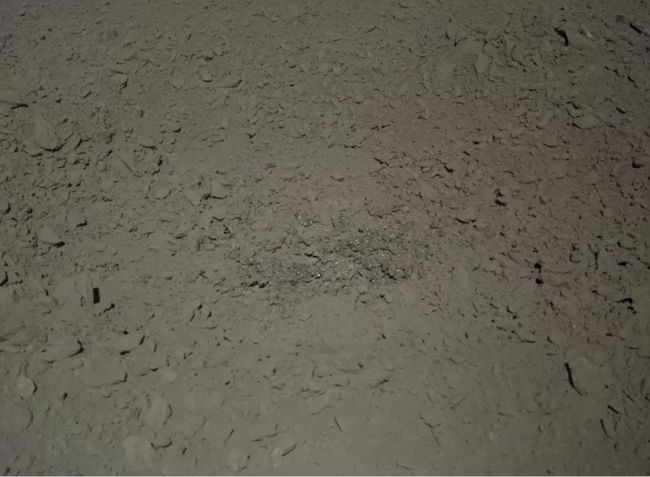 In July, the Yutu-2 rover, launched as part of the Chang'e 4 mission to conduct research on the far side of the Moon, found an intriguing substance on the lunar surface. Yutu-2 captured the glittering material as it drove pass a crater about 2 meters in diameter. Media dubbed the mysterious finding as an unusually colored ‘gel-like’ substance. Well, the wording appeared to be wrong, however, it did attract major interest of lunar scientists and space enthusiasts all over the world

The shiny substance attracted attention of the drive team, and they decided to have the rover check it out up close instead of sending Yutu-2 further west, which was the original plan.

The first photos of the substance were of low resolution, so scientists couldn’t determine the nature of the phenomenon. However, there were some educated guesses out there: one of the explanations was molten glass formed after a meteorite impact.

The planned operations were postponed as rover studied the mysterious substance as well as the territory near the crater that contained the material.

The drive team was cautious though, since there were some concerns that Yutu-2 can get stuck in the crater. 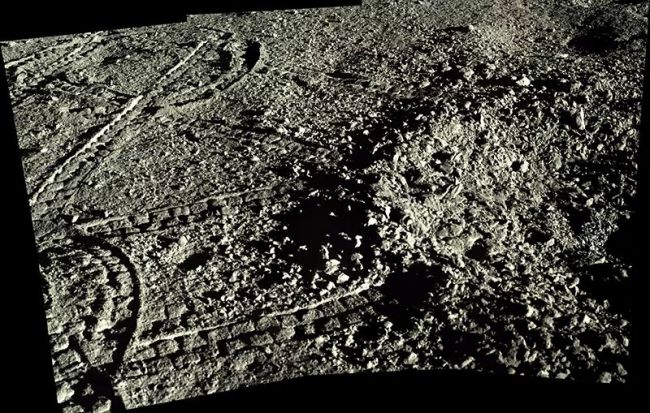 The edge of the crater that contains the mysterious substance. Credits: CNSA/ CLEP/Spacecom

Yutu-2 used its Visible and Near-Infrared Spectrometer (VNIS), an instrument that detects light reflected off material to reveal its makeup, to conduct the analysis. The shiny weird material was additionally studied in August.

This month, the China Lunar Exploration Program released another photo made by the rover that likely solves the mystery.

The picture was made via the rover’s main camera and shows the part of the small crater that contains the material.

The substance is colored differently than its surroundings and indeed contains numerous bright spots.

‘The shape of the fragments appears fairly similar to other materials in the area. What this tells us is that this material has a similar history as the surrounding material,’ says Dan Moriarty, NASA Postdoctoral Program fellow at the Goddard Space Flight Center in Greenbelt, Maryland, who has analyzed and processed the newly-released image ‘It was broken up and fractured by impacts on the lunar surface, just like the surrounding soil.’

‘I think the most reliable information here is that the material is relatively dark. It appears to have brighter material embedded within the larger, darker regions, although there is a chance that is light glinting off a smooth surface,’ Moriarty told Space.com.

According to Moriarty, the material may have been excavated by the crater-forming impact. It could also be a form of breccia – a rock composed of broken fragments of minerals.

‘But we're definitely looking at a rock,’ concluded Moriarty. 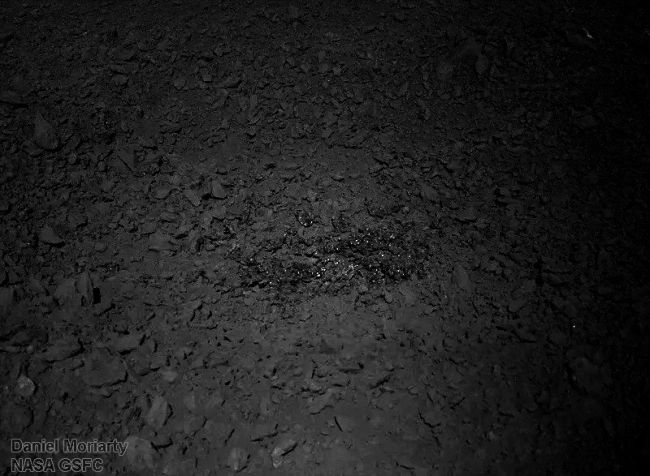 The enhanced, high-contrast version of new image from Yutu-2 rover shows the bright specks on the substance in some detail. Credits: CNSA/ CLEP/Spacecom

The bright specks on the photo do resemble impact glass called impactite, which makes the original quest quite legit. The material appears to be similar in nature to a sample of impact glass found during the Apollo 17 mission in 1972. A so-called sample 70019 was made of dark, broken fragments of minerals cemented together and black, shiny glass.

So, the Moon probably has no gel on its surface, we all were just lost in translation. However, the results of VNIS measurements haven’t been announced yet. Let’s wait for them to be 100% sure.