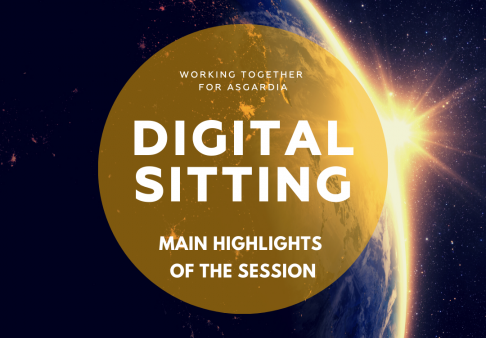 On the first day of the Sitting, the Chairman of Parliament, Lembit Öpik, announced that the Government of Asgardia would be reconstituted between now and November 2020. He also has shared that the Prime Minister, Ana Mercedes Diaz and her cabinet had stepped down from their positions.

“The challenge now is to take this opportunity to develop an even better relationship between Parliament, Government, and Administration in the months and years ahead. We will take some important strategic decisions regarding political processes which will benefit everyone. I know Parliament has been immensely impressed with the work of the first Asgardian Prime Minister and her Cabinet, in an evolving environment. Our duty is to move forward, and make our political system deliver the single most important factor we need: a thriving Asgardian economy,” commented Lembit Öpik.

The Citizens Act of Rights was presented by MPPaul Lovette, who has outlined some updates to the wording and items in the Act after several discussions with fellow Members of Parliament (MPs), the Chairman of Parliament and the Head of Nation himself.

MP and Deputy Chairman Ben Dell presented the Civil Servants Act and explained some points about it. After each presentation, there were brief Q&A sessions where attendees could ask questions from the presenters and share their thoughts on the legislation.

Next, the first reading of the Judiciary Act was presented by Sotirios Mouzakitis of the Justice Committee. After the presentation, the MPs held an in-depth debate about the legislation and offered their insights on the matter.

Head of the Administration for the Head of Nation, Lena De Winne, presented the National Budget for Asgardia for parliamentary approval. Dr De Winne answered questions and clarified points about the budget for attendees. She also participated in a discussion about Asgardia’s currency and the pilot testing currently underway in which Members of Parliament have started to receive payment for their work in SOLAR on the Asgardia website. The process is ongoing and being refined as MPs have only received a small percentage of funds owed to them.

Lena De Winne has also expanded on the SOLAR digital currency of Asgardia. She explained that it will be a stable coin and would eventually be exchanged 1:1 with the Euro once the Currency Act was passed and the Bank of Asgardia was established.

The MPs held a discussion about the resignations in government and the efforts currently underway for the reconstitution effort. The attendees gave feedback on reconstitution of government and circumstances and suggestions on the process which should be completed by November 2020. Chairman Öpik announced that after consultation with the Administration, he will be addressing the public about reconstitution and what the next steps in the process that will take place between the time of the meeting and November 2020.

Day 2 has also featured the presentations made by ten of the twelve Committees to report on the work completed since the last digital sitting. Cheryl Gallagher, Chairperson of the Culture Committee, announced the winners of the Asgardian Parliament Space Art Contest.

The day began with Chairman Öpik announcing that quorum for the vote had been reached with 79 registered voters and that all ten items up for vote had been passed. All results will be checked by the counting commission for transparency and the full details will be published on the Asgardia.space website. The Members of Parliament set a goal to surpass this in their next digital sitting and keep up the momentum so far.

The MPs held a discussion about the Solar, implementation, what it could be applied to and the sustainability of the national currency. Attendees have also discussed issues associated with the Asgardia payment system . They’ve also pointed out the challenges presented to comply with fraud prevention around the world, the limitations set on other payment gateways, and the translation of currency. It was decided to table the topic in order to hold an in-depth discussion during the next all day working session.

After the calendar of events for the upcoming year was presented, the Members of Parliament discussed briefly opening up some of their meetings for public view via live stream, the logistics required for it will be discussed during their future weekly meetings.

Finally, MPs have discussed plans for specialized meetings needed for covering certain topics related to building a nation and living in space. Experts in different fields would be invited to come to speak with Parliament through their digital platform on Zoom. It was established that the first specialized meeting would take place in March and will focus on economics. It will be led by Deputy Chairperson of Parliament Ben Dell.

Congratulations to Parliament for a successful and productive digital sitting!