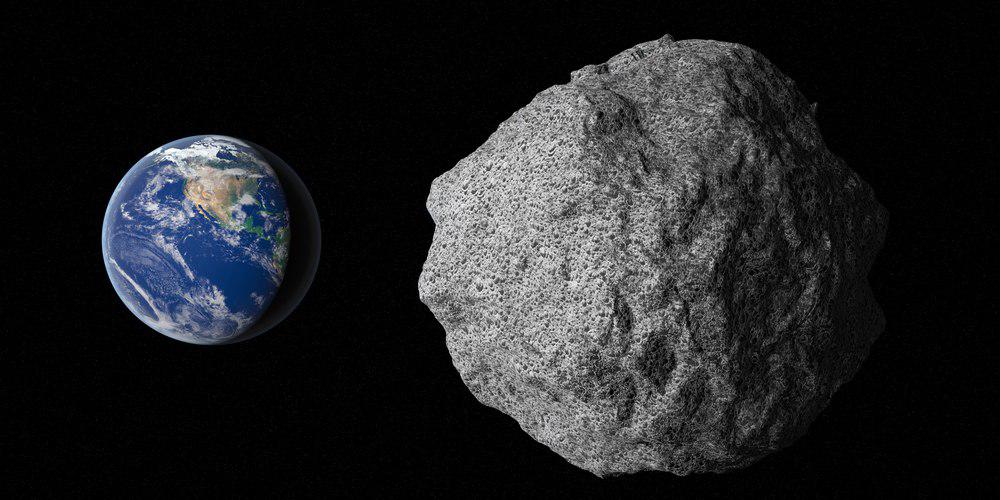 On December 3, 2018, NASA’s OSIRIS-REx spacecraft arrived at Bennu the asteroid. On December 10, NASA stated that the spacecraft has already made an intriguing discovery. It has found hydrated minerals on the surface of Bennu, evidence for previous (ancient) water on this asteroid.

However, that doesn’t mean Bennu currently has liquid water inside or on its surface. Instead, it demonstrates that Bennu’s parent body, most likely a much more massive asteroid than Bennu that broke off many, many years ago, did have water.

OSIRIS-REx marks NASA’s first asteroid sample-return mission, which will gather samples of the surface regolith and send them back to Earth for further examination.

Humberto Campins, a University of Central Florida planetary scientist, professor of physics and member of the OSIRIS-REx Science Team explained that they are very excited by OSIRIS-REx’s findings so far. The images the probe sends back are stunning and spot-on, and what the team expected due to predictions made with the instrumentation at the Arecibo Observatory in the late 90s and early 2000s.

The team will spend a year and a half mapping Bennu and will wait until mid-2020 to gather the samples, Campins added.

So what about the water?

The data stems from two spectrometers, the OSIRIS-REx Visible and Infrared Spectrometer (OVIRS) and the OSIRIS-REx Thermal Emission Spectrometer (OTES), which uncovered the presence of the hydrated minerals – molecules that contain oxygen and hydrogen atoms bonded together, called “hydroxyl groups” – that exist globally across the asteroid in water-bearing clay minerals. This means that Bennu’s rocky material once interacted with water, millions or billions of years ago.

Bennu itself is too small to have ever hosted liquid water, so where did the water come from? Scientists believe the liquid water was present on Bennu’s parent body, a much more massive asteroid that Bennu broke off of. Possibly similar to the dwarf planet Ceres, the most massive asteroid in the main asteroid belt, which also demonstrates evidence of liquid water in the past.

Amy Simon, OVIRS deputy instrument scientist at NASA’s Goddard Space Flight Center in Greenbelt, Maryland explained that the presence of hydrated minerals across the asteroid confirms that Bennu, a remnant from early in the formation of the solar system, is an ideal candidate for the OSIRIS-REx mission to examine the composition of primitive volatiles and organics. When samples of this material are sent back to Earth in 2023, scientists will receive a host of new information about the history and evolution of our solar system.

Bennu’s appearance is also fascinating. It looks sort of like a rough diamond. Data collected by the OSIRIS-REx Camera Suite (OCAMS) corroborated ground-based telescopic observations of Bennu, validating the original model developed in 2013 by OSIRIS-REx Science Team Chief Michael Nolan and his coworkers. That model proposed such a shape for the asteroid, which turned out to be pretty much accurate, along with the diameter, rotation rate and inclination.

The data gathered from radar characterization of this asteroid at Arecibo was vital for this mission’s choice of target and backed by OSIRIS-REx science definition and mission planning. Arecibo’s radar data gave the team two main advantages. It decreased the uncertainty in the shape of the asteroid and its orbit, which help mitigate risk and increase the likelihood that the mission would be successful.

Since radar observations don’t give scientists any information about colours or brightness of the object, they are excited to see the asteroid up close through the eyes of OSIRIS-REx. As they gain more details, they are figuring out where the craters and boulders are and were very pleasantly surprised that virtually every little bump they saw with their radar image back then is there.

Overall, Bennu’s surface is very rocky, with a combination of boulder-filled areas and a few smoother locations that don’t have any boulders. However, there are more boulders than was expected. Notably, one boulder close to the south pole literally stands out at approximately 164 feet (50 meters) high and 180 feet (55 meters) wide.

So far, the mission is going according to plan. Dante Lauretta, OSIRIS-REx principal investigator at the University of Arizona, Tucson stated that their initial data demonstrate that the team chose the right asteroid as the target of the OSIRIS-REx mission. They have not found any insurmountable issues so far on Bennu. The spacecraft is functional, and the science instruments are working better than needed.

OSIRIS-REx is presently performing a preliminary survey of the asteroid, flying over Bennu’s north pole, equator and south pole as close as 4.4 miles (7 km). This will assist scientists in figuring out Bennu’s mass, essential data that is needed for the spacecraft’s insertion into orbit, since mass affects the asteroid’s gravitational pull on the spacecraft – in addition to the asteroid’s internal structure and composition. The OSIRIS-REx Laser Altimeter (OLA), an instrument contributed by the Canadian Space Agency, will also be able to make its first observations.

OSIRIS-REx is set to enter orbit around Bennu on December 31, 2018, and it will remain in orbit until mid-February 2019. Then, it will leave orbit to initiate another series of flybys for the next stage of surveys.

During its first orbital phase, the spacecraft will come within a range of 0.9 miles (1.4 km) to 1.24 miles (2.0 km) from the center of Bennu. This will set a new record for the smallest body ever orbited by a spacecraft, as well as the closest orbit of a planetary body by a spacecraft.

'I know my efforts in Asgardia are helping evolve humankind,' — Cheryl Gallagher, MP