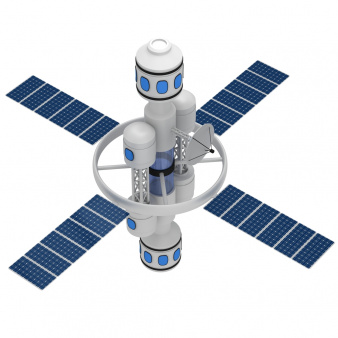 When the Texas-based company NanoRacks was established a little under a decade ago, its activity was primarily dedicated to delivering commercial payloads to the ISS on equipment racks (hence the name, NanoRacks.) Over the past two years, NanoRacks projects have grown more diverse, as well as more ambitious. In 2018, it signed contracts with NASA and Boeing to build the first ever commercial airlock for the ISS. Today, it's starting to implement its magnificent orbital Outpost program

In shaping his ideas, NanoRacks CEO Jeffrey Manber looks up to architect R. Buckminster Fuller known for having invented geodesic domes, as well as for having said all humans were 'astronauts on a little spaceship called Earth.'

Manber sees his company as lifting Buckminster Fuller's vision off the Earth on 'little spaceships', outposts that will expand humanity's presence throughout the Universe — namely, Independence-1.

Manber intends to start with re-using Centaur rocket boosters (upper stages) of United Launch Alliance’s Atlas 5 rockets' first stages. Once such an upper stage has fulfilled its mission of taking a payload into orbit, it will be altered by either ISS crew, or robotically (as proposed by Maxar Technologies' MDA US Systems) to suit its new role of an outpost.

For Manber the idea goes along with the intention of the Trump administration of commercializing operations in low-Earth orbit around 2025, thus helping the nation move 'into the next chapter with commercial outposts.'

The NanoRacks CEO has explicitly said the new project mustn't rely on any of the businesses in the industry, like Axiom, Bigelow, Boeing, Lockheed — or NanoRacks, instead hoping for new players with new, unique abilities, to come forth.

The concept of turning an upper stage into an orbital outpost traces back to the 1960s when a then-young NASA was contemplating re-use of Saturn V's upper stages for the purpose, but had to abandon the idea that seemed too costly and technically challenging.

However, NASA did the same with Skylab, rebuilding an upper stage into a space station before it was launched.

Today, NanoRacks is teaming up with United Launch Alliance, Space Adventures and Maxar to combine the existing upper-stage conversion concept and latest technology. It's one of the six projects supported by NASA's deep-space habitat initiative, NextSTEP.

At present, NanoRacks and NASA are looking at creating an on-the-ground prototype out of a Centaur upper stage that failed to obtain technical approval for its primary use, at Space Flight Center in Alabama, to demonstrate that the company and its collaborators have what it takes to solve all the technical tasks the project envisions.

Manber is well aware that there will come a day when Centaur upper stages aren't manufactured anymore. The Vulcan rocket currently in development by ULA, will be using Centaur for some time, to then change to refuelable Advanced Cryogenic Evolved Stages (ACES). 'ACES may be a little better as an outpost than the Centaur,' he said.

Outposts are envisioned to work either independently, as ISS modules — which is likely to be the case for Independence-1, space hotels, orbital research labs and manufacturing sites.