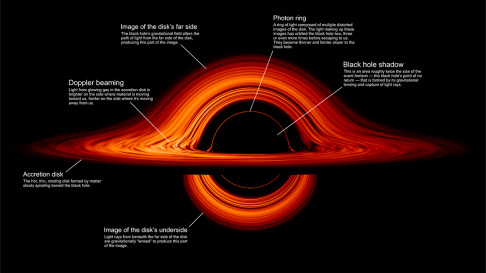 NASA releases a new visualization of a black hole made by researcher Jeremy Schnittman in Goddard Space Flight Center.

Viewers can also see the effect of Relativistic beaming or Doppler beaming. Glowing gas on the left side of the accretion disk that moves towards us so fast that it appears to be more bright.

Quite the opposite happens on the right side of the disk, where gas moves away from us and becomes a bit dimmer.

The asymmetry can no longer be seen if we look at the disk exactly face on, since matter isn’t moving along our line of sight.

A bright ring of light that seems to outline the black hole is actually a ‘photon ring’. Light orbits the black hole in multiple rings, as it gets closer, the rings look more faint and thin until photons fall into the black hole.

‘Simulations and movies like these really help us visualize what Einstein meant when he said that gravity warps the fabric of space and time,’ said Schnittman ‘Until very recently, these visualizations were limited to our imagination and computer programs. I never thought that it would be possible to see a real black hole'

And this April, the whole world witnessed the first photo of the black hole captured by eight ground-based radio telescopes linked together to observe one point in space.

If the spectacular visualization isn't enough for you and you still feel hungry about the black holes, we strongly recommend to watch the cartoon made by NASA about an alien willing to visit one.