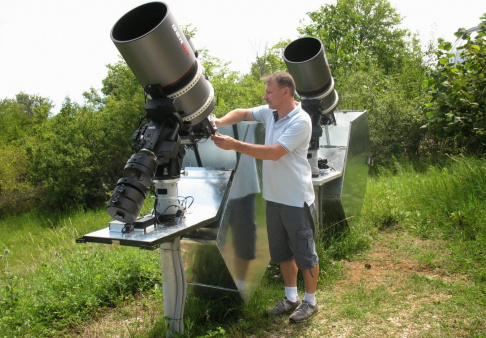 The second interstellar object in history has been discovered in the solar system. This time it is not an asteroid, but a comet, discovered by famous Russian astronomer Gennady Borisov of the Sternberg Astronomical Institute Moscow State University.

Comet C/2019 Q4 Borisov was first spotted on August 30, 2019, by Russian astronomer Gennady Borisov. According to the astronomer, he made the discovery using a self-made reflector telescope.

'For celestial bodies, I observe on my own telescopes aperture, wide-field. So I made a telescope just six months ago, which allowed me to increase the penetration limit. And six months later, it shot the result. Before that, I have discovered celestial bodies with my own homemade telescopes. I observe and discover comets and asteroids with them,' says Borisov.

The Minor Planet Center reports that the discovered space object, most likely an interstellar comet, flew in from outside the solar system. If so, then this is the first comet of interstellar origin and the second similar object after the asteroid 1I/2017 U1 Oumuamua, discovered in October 2017.

According to scientists, the comet moves along a hyperbolic trajectory (around the central body at a speed sufficient to overcome the attraction of the central body) at a high speed of about 30 kilometers per second, and the comet will take several decades to return to interstellar space.

'The comet's current velocity is high, about 150,000 km/h, which is well above the typical velocities of objects orbiting the Sun at that distance. The high velocity indicates not only that the object likely originated from outside our solar system, but also that it will leave and head back to interstellar space,' said Davide Farnocchia of NASA's Center for Near-Earth Object Studies.

Currently, the comet is located at a distance of 420 million kilometers from the Sun. The perihelion of the comet (the closest distance from the Sun) will occur at the end of approximately December 8th.

Scientists continue to observe the object, which, according to their data, can be about 20 kilometers in diameter, and the comet's nucleus has a diameter of 2 to 16 kilometers. Astronomers will continue to collect information to characterize the physical properties of the comet (size, rotation, etc.).