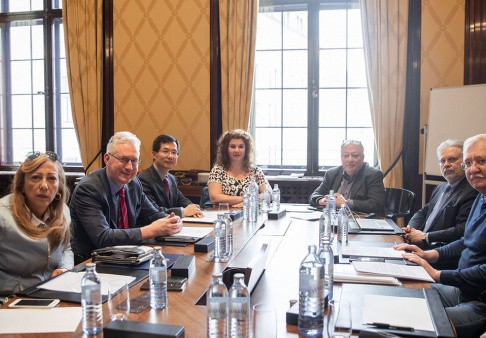 During the sitting, Chairman of the Supreme Space Council Igor Ashurbeyli shared his estimate of the results of the Asgardia’s Executive Congress held in Vienna, Austria, on April 10-12 , and talked of new tasks SSC sets before itself today.

The sitting yielded the decision of starting to collect suggestions for amendments to the Constitution of Asgardia.

Minister of Information and Communication Lena de Winne presented an exposure draft of Asgardia’s first State Award - the Gold Medal for Achievements in Space Science. The draft was endorsed by all of the SSC members.

Lena de Winne told Asgardia Space News that the medal will be awarded to persons, teams, and institutions for their outstanding contribution to space science.

“The medal may also be awarded, besides scientists, to philosophers and cultural luminaries whose work has influenced the formation of humanity’s mindset in what concerns the importance of space as man’s habitat,”  Ms. de Winne emphasized.  "Only a person’s, or entity’s, professional achievements and reputation will be the underlying criteria for awarding the Medal."

The official statement on the Medal for Achievements in Space Science is to be released soon.