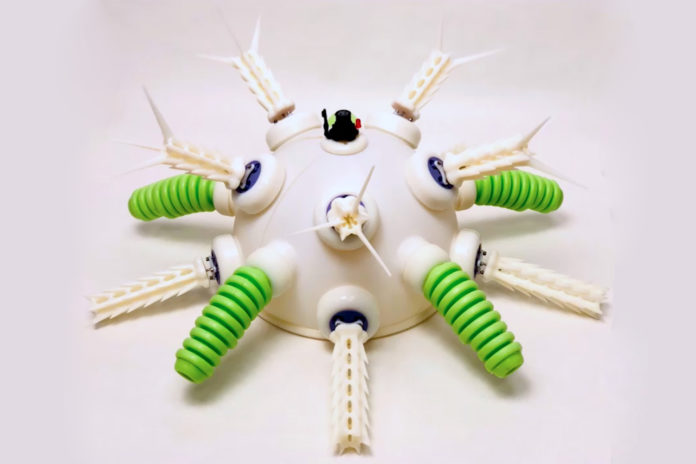 During the International Conference on Robots and Intelligent Systems (IROS) held in Macau this week, developers from Harvard presented a robot inspired by a sea urchin. The machine was dubbed UrchinBot

We’ve seen a variety of bio-inspired robots: there is the RoboBee inspired by insects, the Tunabot that mimics fish, the robot inspired by a flying squid, and many more. Still, we bet you’ve never seen a robot based on the body plan of the sea urchin! However, the animal has inspired engineers before.

Sea urchins, close relatives of sea stars and sea cucumbers, are actually pretty amazing marine animals. They seem great, before you accidentally step on one.

This week, the team presented a machine that ‘incorporates anatomical features unique to sea urchins,’ and actuated by pneumatics or hydraulics.

The machine doesn’t really look like a typical sea urchin, instead it resembles a sadistic chewing toy for a pet. But there might be other analogies out there…

The thing is, developers used a juvenile sea urchin as a prototype, not an adult one. Why? Because mature grownups have such a complex anatomy, which is quite impossible to replicate. So the team focused on a more simple post-larval juvenile form of the animal.

The team was inspired by sea urchin’s locomotion. The marine animal may appear to be incapable of moving, but that’s a wrong first impression. It’s just not that speedy, instead it slowly navigates in the wide range of challenging environments, exploring the seabed or coral riffs mouth down.

Urchins move via coordinated action of thousands of individual flexible sticky tube feet, the animal basically pumps water into and out of adhesive feet.

The rigid spines that cover sea urchin’s body are used for protection, to capture food, and some help the locomotion of the animal.

UrchinBot has five flexible feet (green structures) and ten rigid moving spines. The spines cannot be managed separately, they only generate symmetrical rotation movements. The adhesive properties of the tube feet were replaced by a system of extensible and retractable magnets. The machine is even slower than the actual sea urchin, its maximum speed is 6 millimeters per second, or 0.027 body lengths per second.

The rest of UrchinBot’s body consists pumps, valves, and electronics that allow it to operate completely untethered, both on land and underwater. The team states that their development can be used for underwater cleaning and inspection applications, especially in situations where heavy fouling would be a challenge for traditional machines.

The mouth of a sea urchin, dubbed Aristotle's lantern, is one of the most massive and complex organs in its body. The jaw apparatus is composed of calcium structures with 5 teeth that allow the animal to grasp, scrape, pull and tear. As terrifying as its mouth looks, it proved to be extremely efficient and has actually inspired engineers before: in 2016 the team from UC San Diego built a claw-like device that can scoop up soil on extraterrestrial environments.