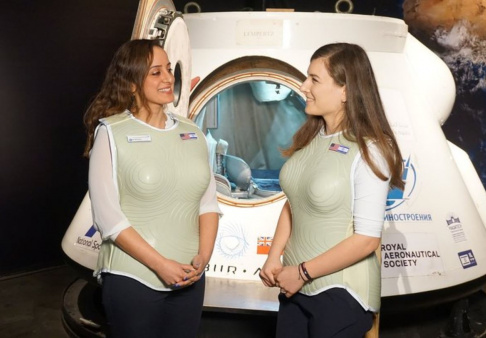 With the Artemis program, NASA is getting closer to sending humans back to the moon, and then onto Mars. One of the pressing challenges the space agency must overcome is the harsh radiation that exists outside of Earth’s atmosphere

To combat the problem, NASA launched the Astrorad vest on Northrop Grumman’s last commercial supply mission. Unlike spacesuits, the vest is flexible and moves with astronauts as if it were made of spandex (but it is not). It is designed to protect the human body’s most vulnerable organs.

The Astrorad vest was designed through a collaboration of NASA, the Israeli Space Agency, Lockheed Martin and Stemrad, a startup that developed the vest. Stemrad initially focused on making protective equipment for first responders who deal with nuclear accidents, and then expanded into space technology, creating a vest that shields organs susceptible to radiation sickness or cancer, without impinging on mobility.

'Astrorad is very unique in the sense that it employs the principle of selective shielding, and in doing so, it’s providing augmented protection to those most sensitive organs and bone marrow,' says Stemrad CEO Oren Milstein. The vest, which is made of a polyethylene mesh, is the thickest around the lungs and the gastrointestinal tract, as well as the breasts and ovaries of female astronauts.

The vest is heavy — weighing almost 23 kilograms — which shouldn’t be a problem in microgravity. It will soon undergo range of motion testing: astronauts will wear it while performing regular tasks on the space station such as housekeeping or exercising. 'Our key challenge to overcome is aerodynamics, of course,' Milstein says. 'To protect, you need efficient use of mass but to also make it flexible.'

In 2021, Astrorad will travel aboard the Orion spacecraft to the moon, allowing Stemrad researchers to get better acquainted with the type of radiation they are dealing with when it comes to deep-space travel.

In theory, the effectiveness of Astrorad is comparable to that of an onboard storm shelter. Astronauts won’t have to wear it all the time, but rather can carry the vests with them in case of a radiation event, which will be detected by the sensors on Orion.

'We’re going to be able to take the amazing data that we get from this ergonomic experiment ... then pair it with our Artemis 1 data in late 2020 and get actual information on performance in the radiation environment,' Milstein says. 'Combine those two, and we’ll be able to improve the performance and design for the deep-space radiation environment.'