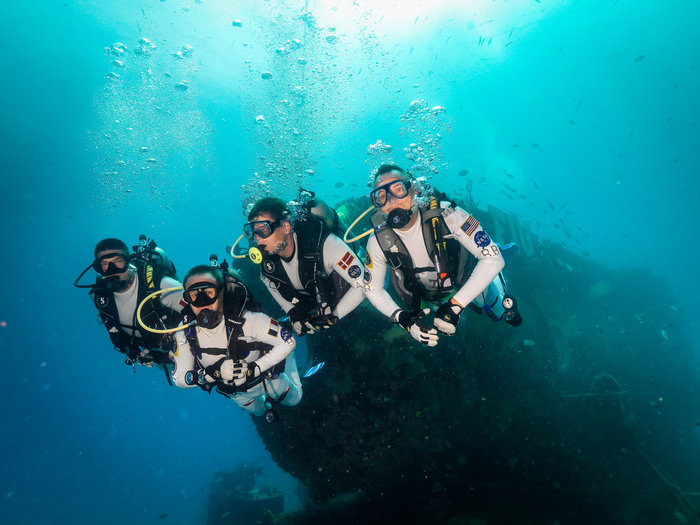 Usually, NASA conducts underwater simulations near Key Largo, Florida to train teams for space exploration, as well as test some new equipment designed for future missions. During the standard NEEMO missions, groups of astronauts live in the Aquarius underwater laboratory, located 20 meters below the surface of the ocean. The research station has been used by NASA since 2001, hosting astronauts up to 3 weeks aboard.

The overview of the NEEMO mission conducted July 2016

However, today's expedition has a slightly different concept: the simulation is focused on preparations for the safe return of astronauts to the Moon in 2024 and the training is performed off the coast of California. The chosen training spot isn't such an extreme environment, however, its underwater terrain strongly resembles the lunar surface.

This time, aquanauts won’t be living aboard Aquarius, instead, they will return to the surface every day after training and stay on the island of Santa Catalina.

Astronauts will be testing submersibles, subsea rovers, and a suit for extravehicular activity (EVA).

‘With these analogue missions everything is made to be as realistic as possible without leaving Earth, so we will be as busy as astronauts on the Space Station, using similar operational techniques with mission control, briefings and procedures’ says ESA'sPesquet.

The most experienced astronaut of the group is definitely Drew Feustel: he has conducted 9 EVAs during his career, overall the NASA astronaut has spent more than 60 hours in outer space. During his stay on the International Space Station as a crew member of Expedition 50/51, ThomasPesquet conducted 2 spacewalks, spending a total of 12 and a half hours in outer space. Ha has also taken part in ESA’s CAVES underground course and the NEEMO 18 mission.

Getting in and out of the Exosuit isn’t easy !! #neemoNXTpic.twitter.com/tJFwaAnY48

JAXA astronaut and a doctor, Norishige Kanai, was a crew member of Expedition 54/55 in 2017, for now, he has conducted only one spacewalk. In 2015, Kanai participated in the NEEMO 20 mission.

NEEMO missions had proven to be very useful for spacewalk practice and equipment testing. The last underwater mission was successfully completed a month ago by ESA astronaut Samantha Cristoforetti, who commanded the NEEMO 23 mission aboard the Aquarius laboratory.