Video: What if Our Moon Was Replaced by Jupiter? 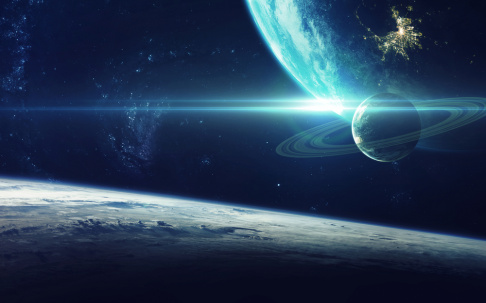 Wouldn’t it be something else to see Jupiter, Saturn or other planets in the sky, instead of the moon? That’s what Nicholas Holmes, owner of the Yeti Dynamics YouTube channel, posted on the web – and it’s going viral

Using video he took of both the daytime and the nighttime sky, Holmes swapped the moon for other planets, creating some very believable animations in the process.

That caught the attention JAXA planetary scientist Dr. James O’Donogue, who stated: 'This popular animation shows the correct (I checked the math!) apparent sizes of the planets if they were placed in the moon's position.'

Now, the video is fun, but we know it wouldn’t really be like that. For one, if planets like Jupiter, Saturn or Neptune approached Earth this closely, volcanic destruction would ensue. Not to mention that Earth would become a moon of that planet.

In other words, we’d be no different than Jupiter’s moon Io, which is constantly stretched and compressed by tidal forces, as well as by the gravitational forces of other moons. The result is a build-up of pressure in the subsurface liquid, which causes volcanic eruptions. In fact, with lava shooting directly into space, Io is the most volcanically active body in our solar system.

'We could expect a similar scenario on Earth. Initially, Earth's mantle and crust would be gravitationally attracted to Jupiter and break apart like crème brûlée,' O'Donoghue told Business Insider. 'Volcanic activity on Earth would be the stuff of a disaster movie, and overall, Jupiter would make light work of Earth.'

Also, the particularly pedantic viewers have pointed out that the amount of sunlight is off, and the rotation speeds aren’t correct.

But then again, the truth has never stopped us from enjoying a good movie.