‘We are planning to allow online and offline judicial procedures’ 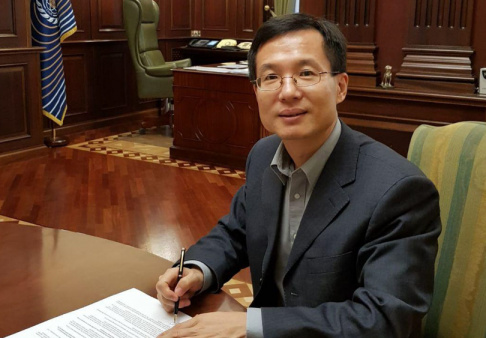 Mr. Zhao, you were nominated as Supreme Justice in the end of July. Taking into the account that Asgardia’s state institutions are now in the formation stage, can you please share some plans for the nearest future? What are the main goals for your work?

I think that the role of the Supreme Justice of Asgardia is very important one to play. So, on the one hand, we have the traditional role of a judge, which is most important and implies dealing with a lot of cases. Indeed, we have already received some complaints, and they are going to be considered first. On the other hand, it is a constitutional role. It means I also have to provide some independent opinions on decisions that have to be made by Asgardia’s Parliament and Government. These are the two key directions of my work.

Are you going to nominate other judges?

Yes, we are looking to appoint of other judges. According to the Constitution, we will have five judges on the court. That means that I will also be looking at the possibility of appointing of the other four judges. This is an ongoing process, and I am trying to come up with good candidates for the positions. These four judges will have to deal with different types of cases. Each judge will look after their own specific area -- constitutional cases, civil cases, administrative cases and criminal cases. When it comes to hearings, we are planning to allow the possibilities of online and offline judicial procedures. Online dispute resolution with using of video conferences means that you do not really need to travel to a specific geographic location. Also, for some simple cases, we can use the written form. That means that we will make the decisions based on documents or materials submitted by the two parties.

You are the Head of the Department of Law at the University of Hong Kong. How did your students take your nomination as Asgardia Supreme Justice?

I do not actively promote myself in my class lectures. But, indeed, some students did get information about Asgardia after my nomination. I think that will be good in connection with the future direction of the space law and space activities. They are looking for information about the space state on the website; maybe some of them will later decide to become part of it.

As a person who is well-known as the leading expert in the space legal arena, could you please mention a salient example of implementation of space law?

When it comes to space law, I am always reminded of one important case regarding the non-appropriation principle. Maybe you’ve heard about the Lunar Embassy, a US-based firm that sells plots of land on the moon to humans. You pay the money and they give you a certificate of ownership. Lunar Embassy authorised one Chinese person to sell the land on the back side of the Moon. So that person set up the company in Beijing few years ago, but very soon, the government of China declared this business illegal. So I can say that it shows that we are really sticking to the general principles of space law. That is the non-appropriation principle that has been widely recognised by the international society. So, for Asgardia, we definitely also respect all of these peaceful principles. But with the full honour to the principles, we do need to come up with more specific activities, to come up with more specific laws to deal with issues.

As you know, there are some startups planning to mine asteroids from space for valuable metals such as gold or platinum. Does their business fit the non-appropriation principle?

I did some research of this issue recently, and it is very pressing issue. First, we know that in 2015, the US has enacted a law acting regarding space exploration in business path. At the end of the same year, the International Institutes of Space Law released an announcement, saying that mining asteroids is not illegal according to current international space law. Second, the United States has complied with international obligations. Third, the international institutes caused some doubts about the issue -- whether it is the best way to deal with space exploration. So I think these are the three main points that were put forward by the International Institutes of Space Law. Very soon, in 2017, a second country, Luxembourg, also created a similar law, enabling mining asteroids. So I think now, in 2018, when two countries have already made the law, saying that private entities and individuals can go to outer space to carry out exploration of natural resources to make a profit, it is good time for other countries and international institutes starting to consider the regime to deal with the exploration of the space resources. In my opinion, we should elaborate a multilateral approach. On the one hand, we should take into account the interests of the countries that have been investing money into exploration projects. On the other hand, we should respect the interests of the international society. We have to find the way of balancing these two different interests.

Maybe now is right time for elaborating an approach to the problem of space debris also? It seems like sooner or later the state that launches a rocket will become responsible for the parts littering the orbit…

Definitely, the problem of the space debris grows very quickly. United Nations Committee on Peaceful Uses of Outer Space already had put space debris mitigation into the agenda for discussion for many years. Unfortunately, the international society has failed to create any legally binding documents on this issue. What we have achieved is only one guideline adopted under the Science and Technology Subcommittee. So, the situation is rather disappointing. That means that we still have a long way to come to consensus, to legally binding documents regarding the mitigation of space debris. As we can see, the situation is rather difficult for countries that produce many launches and make many space debris. Normally they have some hesitations about accepting any binding documents. But the good thing is that the international society came up with some discussions on how to mitigate space debris treats. Some ideas have been actualized -- for example, there is an opinion that we can use a market approach. That means that we can look into how much of space debris was produced by each country, and depending on percentage, they will have to provide a certain ratio into pool that resolves the space debris problem. Despite the difficulties with the implementation of binding documents, we must move forward to make a good legal regime that helps mitigate the space debris problem.