What Is Stopping Us From Building a Space Elevator? 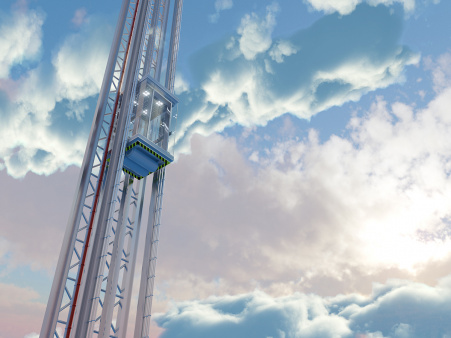 Earlier this year, researchers Zephyr Penoyre and Emily Sandford presented a study called ‘The Spaceline: a practical space elevator alternative achievable with current technology.’ Theoretically, the project is doable. So what is stopping us?

Why traveling to space or even sending payloads there is still such an expensive luxury? There are reusable rockets out there and the competition on the market rises every year, thus lowering the prices. However, sending one kilo of payload with SpaceX Falcon 9 reusable rocket would still cost a client about $2,7 thousand.

The price tag depends on the cost of fuel required to escape Earth’s gravitational pull. To overcome gravity, a vehicle needs tremendous amount of energy.

Is there an alternative? Well, space elevator would really help us out. However, it probably would look different from the one Charlie road with Mr. Wonka.

First of all, a space elevator should start from the equator, so it reaches a geosynchronous orbit, this way the ‘first floor’ and the ‘last floor’ would rotate synchronously. So we better consider Brazil, Indonesia or Kenya to host it. Mr. Wonka would definitely refuse to move his factory there, it’s too hot — the chocolate would melt, and he would get bankrupt.

Also, a space elevator needs to be supported by centrifugal forces, and thus require a large counterweight beyond geostationary orbit to counteract Earth’s gravitational pull.

More importantly, there’s one fundamental limit that makes the construction of the elevator impossible: the lack of the materials. There’s no such material that would be able to handle its own weight over the necessary length: circular geosynchronous orbit is 35,786 km above Earth's surface. A cable would simply break.

This year two researchers, Zephyr Penoyre from the University of Cambridge in the UK and Emily Sandford from Columbia University in New York proposed an alternative to the ‘traditional’ space-elevator They’ve suggested building a 'spaceline' down from the Moon rather than building a space elevator up from Earth.

Theoretically, it is possible. The ‘spaceline’ would be anchored to the Moon at one end, and the weight of the cable itself would keep it pulled taut, pointing toward Earth, by the planet’s gravity.

Practically there are some major challenges we would face in case we go with the spaceline idea. First, we’ve never tried building anything on the surface of the Moon, how to construct such fundamental ‘anchor’ with the gravity of about 16.6% of Earth’s?

Next, how much launches from Earth we would have to conduct in order to build a ‘spaceline’? Such project requires not only extremely complicated engineering, but also a gigantic budget.

Finally, let’s suppose we did build a spaceline, or a space elevator. What happens if a piece of space junk collides with it?

‘A space elevator, whether it’s anchored to Earth or the moon, is static and immovable. It’s at the complete mercy of any object headed its way. Maybe that object is a satellite that can be moved. But maybe it’s broken or defunct. Or maybe it’s a piece of junk that we aren't even tracking,’ wrote a space reporter for MIT Technology Review, Neil V. Patel.

More than 23,000 orbital debris larger than 10 centimeters are known to exist and the estimated population of particles between 1 and 10 centimeters in diameter is approximately 500,000. Any of these object can collide with the cable at the speed of 10 kilometers per second and destroy the whole structure.

So even if we find enough money for such an ambitious project, building a space line would be reckless, considering that any small piece of space derbies can destroy the whole thing.

‘Maybe if we ever figure out how to make a space elevator work, we’ll have also figured out how to actively clean up Earth’s orbit of all the junk,’ wrote Patel.

Well, we better start cleaning up the orbit!