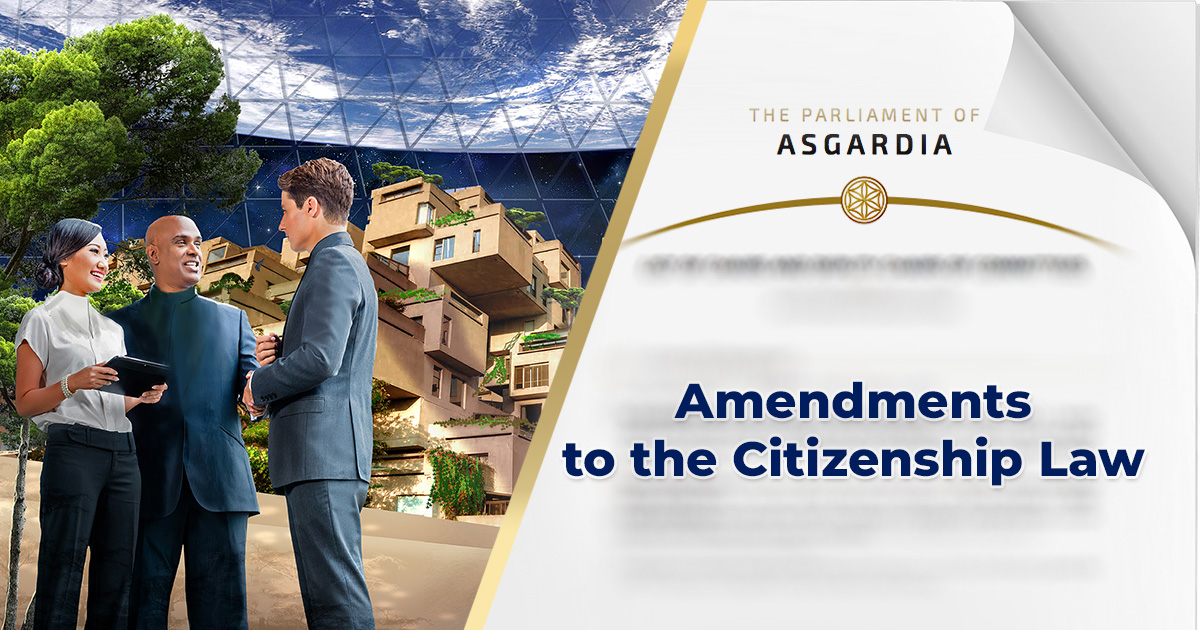 The Citizenship Act, 2018 (0002) was one of the first Laws to ever be put forward in Asgardia – it was first introduced in Parliament’s first live session in Vienna on the 24th of June 2018 where members of Parliament passed it in principle, with a few amendments.

On the 09th of September 2018 in Decree 23, the Head of Nation Dr Igor Ashurbeyli gave the Citizenship Law its official assent with the understanding that one amendment to the act was to be voted on in Parliament’s Autumn Session.

The motion was to add the following wording to section 10 of the Citizenship Law:

That vote has now been passed and the change has been successfully accepted and the Law amended according to due Parliamentary process.

What does this mean?

With the Law fully assented by the Head of Nation, and the amendment agreed upon by Parliament, Asgardia now has an official set of rules that govern Citizenship in Asgardia. This means that Asgardia has the legal framework in place to start officially accepting Citizens of the nation.

The exact details of how the process will work and when the first official Asgardian Citizens will be accepted is still being developed by the Ministry of Citizenship and Parliament’s Citizenship Committee.

The Citizenship Act, 2018 (0002) outlines four types of affiliation one can have with Asgardia, each with different rights and obligations which are as follows:

- A candidate citizen-resident is a potential citizen who has already applied for citizenship and is pending a final decision by the appropriate authority.

- A suspended citizen is a citizen whose rights as a citizen have been suspended due to non-payment of citizenship fees or any other due reason.

- Any other inhabitant of earth who is neither a citizen, nor a candidate.

In the scope of the Act, Asgardia’s law constitutes a special form of citizenship known as ‘Space Citizenship’ and does not contravene the nationality law or any other similar law of any Earthly State.

Residents will be able to contribute to the success of the nation by paying an Annual Citizenship Fee – this sum of 100 Euros a year. The first fee must be paid within 30 days of applying for citizenship, but subsequent fees can be paid anytime within the Asgardian year.

However, the Head of Nation has decreed the first 100,000 Asgardians who signed up for Asgardia and accepted the Constitution are exempt from the payment until 25th October 0003, (November 1st 2019 earth calendar)

The Citizenship Fee will go towards helping the nation grow and will help to provide for Asgardia’s initial budgets. The way the budget is spent will be decided by Parliament each year when they vote on National budget priorities.

The full text of the Citizenship Act details a range of topics from how to acquire citizenship through to grounds on the basis of which a citizenship may be revoked, and it is highly recommended that all Asgardian residents take the time to read through this Act so that they are sure to understand the requirements of citizenship, their rights and their obligations.

Anyone wishing to raise questions or concerns about the Citizenship Act should reach out to their representatives in Parliament.

The Citizenship Fee and the associated fee portal has been officially launched as of the 11th of November 2018 and you can find more information about it and how to get your official digital resident card on the dedicated information page.