Astronomers Confirm the Existence of the Kordylewski Dust Clouds 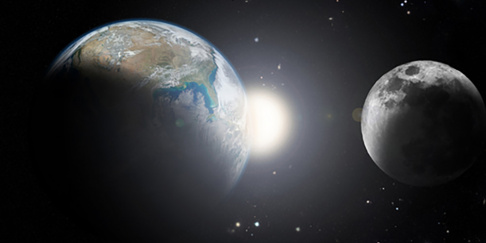 On Oct 25 The Royal Astronomical Society (RAS) announced that astronomers might have confirmed the existence of two evasive dust clouds, orbiting Earth in much the same way our moon orbits our planet, and it is even at around the moon’s distance.

They are called the Kordylewski clouds because they were first reported by and named after Polish astronomer Kazimierz Kordylewski in 1961. However, these dust cloud satellites orbiting Earth are incredibly faint, so their existence is controversial.

Asgardia aims to build a demilitarized and free scientific base of knowledge in space, and these findings are always useful.

But now, the RAS is putting a spotlight on two new papers written about the Kordylewski clouds in their peer-reviewed journal, Monthly Notices of the Royal Astronomical Society. In a statement, the RAS said that a group of Hungarian astronomers and physicists might have confirmed the clouds just where Kordylewski said they would be, in semi-stable points only 250,000 miles (400,000 km) from Earth.

If they are out there, the Kordylewski clouds sit at two unique points in the Earth-moon system. These points are called Lagrangian or Lagrange points, and they are known to be relatively stable, gravitationally. Objects, even dust, drifting close to these points would tend to move neither toward the Earth nor toward the moon. They’d usually stay put, moving ahead of and behind the moon in orbit, according to the RAS.

Two of these Lagrange points, L4 and L5, make up an equal-sided triangle with the Earth and moon and move around the Earth as the moon moves along its orbit.

However, L4 and L5 are not entirely stable because they are disturbed by the gravitational pull of the sun. Regardless, they are believed to be locations where interplanetary dust might gather, at least temporarily. Kordylewski observed two nearby clusters of dust at L5 in 1961, with many reports since then, but their extreme faintness makes them hard to identify, and many scientists doubted if they were there.

Earlier in 2018, the Hungarian team, led by Gábor Horváth of Eötvös Loránd University, modelled the Kordylewski clouds for another paper, to analyze how they form and how they might be spotted. The researchers were interested in their appearance using polarizing filters, similar to those found on some types of sunglasses, explained the RAS.

Once they ascertained what to look for, the researchers then began to find the dust clouds. They set up a linearly polarizing filter system, attached to a camera lens and CCD detector, at Slíz-Balogh’s private observatory in Hungary (Badacsonytördemic).

Next, the scientists took exposures of the supposed location of the Kordylewski cloud at the L5 point.

The images they garnered portray polarised light reflected from dust, extending well outside the field of view of the camera lens.

The RAS said that the observed pattern matches predictions made by the same group of researchers in a previous paper and is consistent with the earliest observations of the Kordylewski clouds 60 years ago.

Horváth’s group were able to rule out visual artifacts and other effects. This means that the presence of the dust cloud is confirmed.

Judit Slíz-Balogh, one of the collaborators on this issue and a lead author on one of the papers stated that the Kordylewski clouds are two of the hardest objects to spot, and although they are as close to Earth as the moon, they are largely overlooked by researchers in astronomy. It is interesting to confirm that Earth has dusty pseudo-satellites in orbit alongside our lunar neighbour.

The RAS also stated that due to their stability, the L4 and L5 points are seen as possible sites for orbiting space probes, and as transfer stations for missions exploring the broader solar system. There are also proposals to store pollutants at the two points.

Future research will look at L4 and L5, and the Kordylewski clouds, to learn more about how stable they are, and if their dust presents any threat to both equipment or future astronauts.

Thus, researchers have confirmed the existence of the Kordylewski dust clouds, which orbit at the L4 and L5 points in the Earth-moon system. The dust clouds orbit approximately in the moon’s orbit and move ahead of and behind the moon in orbit.

Are you excited by the confirmation of the Kordylewski dust clouds? Do you follow new developments happening in space? Then join Asgardia today and connect with forward-looking people.

The post Astronomers Confirm the Existence of the Kordylewski Dust Clouds appeared first on Asgardia.