How Could Bacteria Affect Humans on Mars? 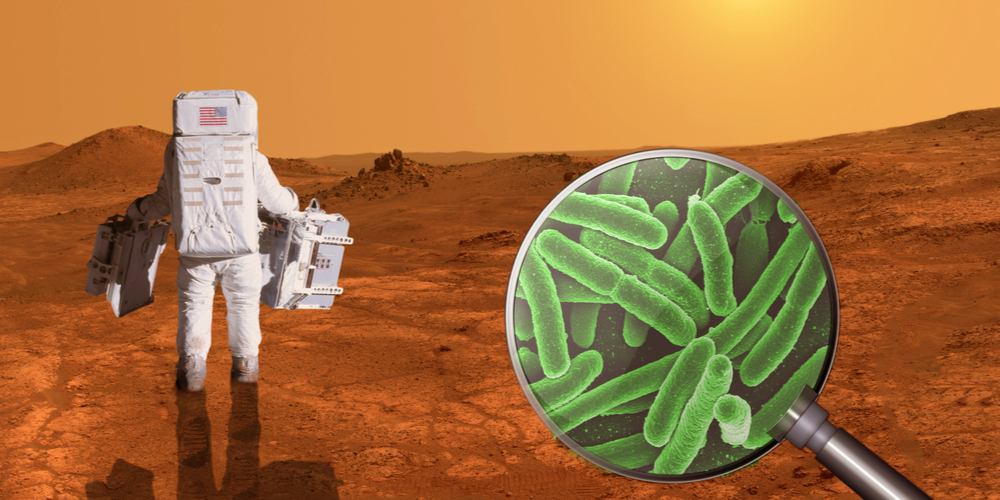 What happens if we humans land on Mars to find a whole new source of infections?

Although astronauts already take a lot of precautions to mitigate the risk of illness, No one knows if Mars is currently home to microbial life.

However, if there is life on the red planet, it is quite possibly single-celled organisms buried underground, sheltered from harsh radiation and perhaps thriving near buried geothermal systems that offer a source of water, nutrients, and energy.

Once humans arrive, they might tap into the planet’s underground resources, which could expose them to possible Martian germs. Moreover, studies of earthly microbes have proved that some bacteria behave very strangely in space, which could be cause for concern.

Thus, a better understanding of how these host-pathogen reactions change during spaceflight is vital for long-duration missions like the years it would take to complete a human mission to Mars.

At least two Apollo missions were affected by sick crew members in the 1960s and 1970s. In Commander Wally Schirra contracted a head cold in 1968 during Apollo 7 only 15 hours after launch. Of course, he infected all his crewmates and fueled what’s been outlined as “a mini-mutiny.”

Moreover, in 1970 on the infamous Apollo 13 mission, at least one scheduled crew member was replaced due to measles exposure. While crew member Fred Haise contracted a urinary tract that went painfully untreated and turned into a kidney infection.

Today, space agencies quarantine their astronauts to lessen the risk of off-world illnesses. NASA guidelines state that that seven days before launch, astronauts must enter a facility where contact is limited to approved family members and support personnel. However, that could still add up to between 40 and 50 people, according to astronaut Samantha Cristoforetti, who has been quarantined at the Baikonur Cosmodrome in Kazakhstan.

During those seven days, doctors routinely evaluate astronauts and their contacts for symptoms of infection, including fever and a sore throat.

Robert Mulcahy, a physician at NASA’s Johnson Space Center, wrote in an email to National Geographic that they’re concerned about common infectious diseases like the common cold or influenza since these are the most prevalent pathogens.

Mulcahy and his team are presently working to update NASA’s quarantine requirements to support commercial crew and future NASA missions launching from the United States.

Some suggested edits are to increase the quarantine period from seven to 14 days, tightening the restrictions on direct contact between astronauts and guests, and requiring extra vaccinations for non-astronaut personnel working in the facility.

Mulcahy highlights how there’s been a resurgence of vaccine-preventable diseases like measles in the general U.S. population, so it is vital to ensure a low risk of exposure to these conditions during the quarantine period.

But what about the microorganisms that do end up riding into space, whether inside or outside of a human?

For many years, scientists have been examining how humans and microbes respond to microgravity, which might also be pertinent to the lower gravity experienced on Mars. While the exact mechanisms controlling those responses are not fully understood as of yet, observations suggest that spaceflight changes the ongoing arms race between infectious microbes and immune systems, potentially favouring infection.

Living in lower gravity can weaken the human immune system and make people more susceptible to disease, as per this research. Simultaneously, microgravity seems to change how microbes respond to stress, in some cases boosting their disease-causing potential and their resistance to countermeasures. Numerous studies, performed both in space and in simulated microgravity on Earth, suggested that spaceflight affects how some bacteria respond to their environment.

For instance, Cheryl Nickerson of Arizona State University’s lab demonstrated that a particular strain of Salmonella Typhimurium, which is the cause of nasty food-borne illnesses in humans, becomes more virulent after spending time in microgravity.

The result? Spaceflight had increased Salmonella’s virulence, causing it to kill mice faster and at lower doses. However, Nickerson emphasized that the effect was transient.

She explained it was only a short-duration experiment and it was not a permanent, heritable change.
So far, Salmonella is the only microbe where a spaceflight-induced increase in virulence has been seen in a live animal. However, various other studies have suggested that spaceflight changes microbial growth, size, metabolism, antimicrobial resistance, and other characteristics.

Other experiments, conducted both in space and in simulated microgravity, tested well-known microbes including E. coli, Yersinia pestis (the cause of the plague), Streptococcus mutans, Staphylococcus aureus, Bacillus subtilis, and Candida albicans, the fungus that causes yeast infections. Some of these studies suggest that other microbes might become virulent in microgravity, while others point to the opposite or saw no response.

NASA’s Mark Ott explained that multiple experiments over the past five decades had indicated individual microbial responses when microorganisms are cultured during spaceflights, such as changes in growth kinetics, antibiotic resistance, and biofilm formation.

Nevertheless, even if modern Mars is barren and lifeless, it will still be essential to keep any future human habitations clean. It will also be crucial to understanding the best ways to fight against earthly germs that might thrive in microgravity.

Nickerson concluded that they couldn’t figure out everything in advance as they don’t know the vast majority of why pathogens cause disease on our own planet. However, this research is incredibly important because microbes rule our world and humans are just playing in it.

The post How Could Bacteria Affect Humans on Mars? appeared first on Asgardia.