How the Government and Parliament of Asgardia Work 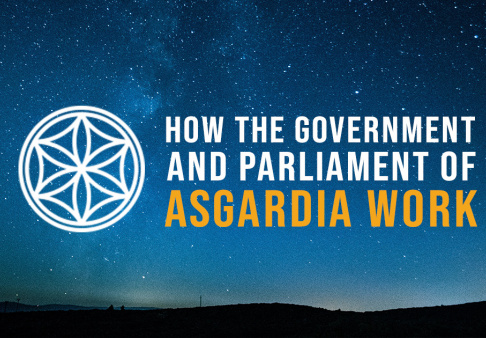 Just a few weeks ago, in one of the most beautiful cities on Earth, Asgardia took yet another giant leap towards the stars.

As part of two bi-elections earlier this winter, every citizen of Asgardia had the opportunity to vote for Members of the Asgardian Parliament. Passionate Asgardians from around the world ran to be elected to represent their districts and with confirmation of the successful incumbents, Asgardia was ready to take its next big step as a nation.

On 24 June 2018 (07 Asgard 0002), the first ever parliamentary session took place in Vienna, Austria. Asgardian MPs from around the world gathered to be verified and to take part in passing our first official laws. We are now officially a democratic society!

How Does the Asgardian Parliament Work?

As the first ever space nation, our governance structure was inspired by the oldest and most successful democracies of the world. Asgardia has adopted a unicameral parliament, which is selected democratically by voting, and that is also a constitutional monarchy.

Then there are three branches of power:

This is the basis for independence and hence democracy. For more detail, refer to Chapter 8 of the Constitution.

The Asgardia Parliament is an elected body of 140+ members from 13 electoral districts. Each of these districts is a subdivision determined by the most commonly spoken languages of Asgardia. However, representation is not limited to language interest. The language districts ensure representation from all of the main Asgardian language bodies, however each MP represents the interests of all Asgardians and during election periods, Asgardians may vote for Members of Parliament from all districts.

In Asgardia, there are no political parties. The main responsibility of each MP is to represent their constituents, protecting their interests and advocating for policies and laws that will improve their lives.

Each MP can serve a term of five years, at which point they must run again if they wish to hold their position. There is no limit on the number of terms a Parliamentarian can serve. For more detail, please see Chapter 8 of the Constitution.

As with most legislative bodies around the world, the Asgardian Parliament works to draft legislation and pass laws. They are also responsible for appointing the Chairman of Parliament, and Mr. Lembit Opik was elected to that role at the June 24th session.

Parliament is divided into 12 permanent committees, corresponding with the various governmental ministries. MPs will work with Ministers to develop policy to advance Asgardia’s interests. The 12 committees are:

Now that Parliament is in operation, the next step is to establish the government ministries.

It’s the Prime Minister’s responsibility to select the Ministers that will form the Asgardian government and propose them to Parliament for endorsement, in line with Article 34 of the Asgardia Constitution. Ms. Díaz is undertaking that responsibility within her first 90 days in office. Minister roles are hired positions, sourced from the entire population of Asgardia, also in line with Article 34 – Government. The selection process is based on qualifications. This will ensure that we have the best and the brightest running the day-to-day workings of the Asgardian government. Each Minister will work closely with their associated parliamentary committee.

Another important component of Asgardia’s democratic structure was achieved in Decree 19 with the appointment of Mr. Yun Zhao as the Supreme Justice of Asgardia.

For Asgardia’s next steps, the following objectives are scheduled to be completed by the end of 2018:

Asgardians everywhere should be very proud of how far Asgardia has come since it was founded less than two years ago. Our nation has gone from an idea, born from the visionary mind of Dr. Ashurbeyli, to becoming a nation with a functioning government. Our governmental systems will continue to evolve as we continue to grow!

If you would like to discuss how the government of Asgardia works, you can join the officialAsgardia Forums and engage with your fellow Asgardia residents! We also invite you to join Asgardia onFacebook,Twitter,Instagram,LinkedIn, andGoogle+ to join in the conversation and keep up-to-date about any Asgardian news and announcements.

The post How the Government and Parliament of Asgardia Work appeared first on Asgardia Space News.