Looking Back at the First Asgardia Parliamentary Session 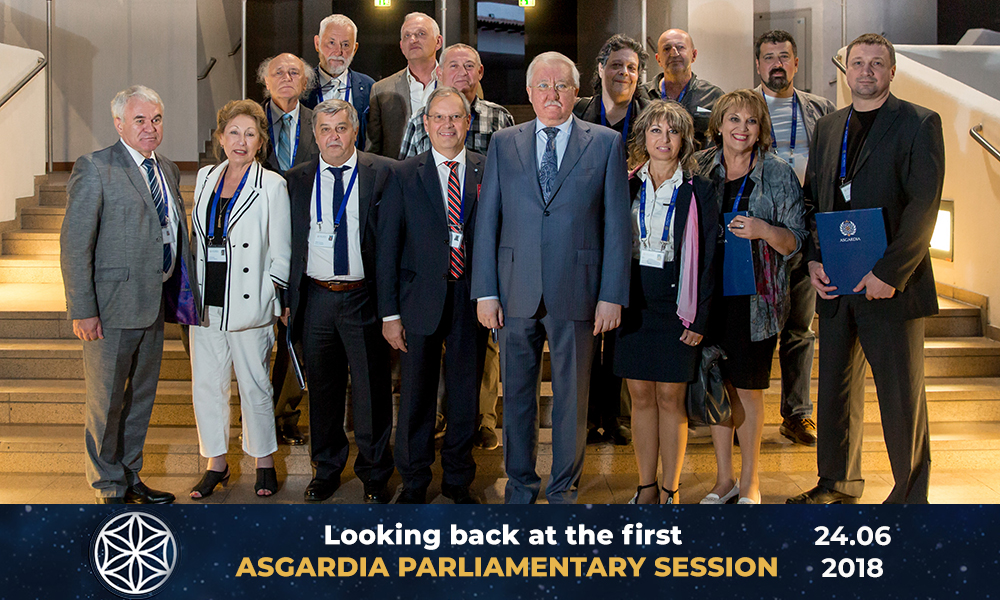 In follow up to Asgardia’s Chairman of Parliament, Lembit Öpik, meeting with Asgardian Members of Parliament in Istanbul last week, now is a good time to look back at Asgardia’s first parliamentary session that took place on 24 June 2018 (07 Asgard 0002) in Vienna, Austria. This event marked the first live event of its kind in the history of Asgardia.

108 Members of Parliament elected from Asgardia’s 13 Districts traveled from all over the world to participate in the session. The meeting began with words of greeting from Dr. Mikhail Spokoyny who in turn introduced Dr. Igor Ashurbeyli, who was officially inaugurated as the Head of Nation the following day.

The Head of Nation signed Decree No. 19 appointing Mr. Yun Zhao as the Supreme Justice of Asgardia, in accordance with Article 35, item 3 of the Constitution.

The agenda for the day included:

Election of the Speaker of the meeting

1.Voting on Act of the First Parliament of Asgardia

2. Voting on the Agenda

3. An Act on the Enactment of Legislative Acts

5. Election of the Chairman of Parliament

6. Election of the Acting Prime Minister

Mr. Lembit Öpik was elected as the Speaker of the meeting. His extensive experience in parliament in the United Kingdom was a great asset to everyone in attendance.

The first piece of legislation was the Act on the First Parliament of Asgardia, which was approved and adopted by the Head of Nation to inaugurate the first sitting of parliament. This act outlined the basic duties and expectations attached to the office of an Asgardia Member of Parliament.

The fundamental principles that all parliamentarians agreed to before assuming the office of a Member of Parliament were as follows:

- All legislations and regulations shall be made in accordance with the Constitution and conform to the supreme values of Asgardia.

- Parliamentarians are expected to perform their duties as representatives of their respective electoral districts with vigour and diligence. This includes the obligation to attend physical and virtual sittings of parliament and to vote.

-Parliament exercises legislative authority in Asgardia. Through various committees specialized in particular affairs and ad hoc commissions, Parliament has powers to legislate on any such matter as may be necessary for the functioning and government of Asgardia.

Furthermore, voting on the agenda included an Act on the Enactment of Legislative Acts and voting on Citizenship Law. The two laws were reviewed, debated, amendments were made, and then passed. More details about these laws will be published at a later date. The Head of Nation Igor Ashurbeyli signed the laws immediately after adoption.

After his impressive conduct during the parliamentary session, parliament elected Mr. Lembit Opik as the Parliament Chairperson.

Ms. Ana Diaz assumed the position of acting Prime Minister, in accordance with the article 33, item 6, and Article 34, item 4 of the Constitution.

This was a truly momentous day, not only for those Members of Parliament who were present, but also for Asgardians everywhere. The democratic process is truly alive and well in Asgardia!

If you have not yet joined Asgardia, sign the constitution now and become an Asgardian today!