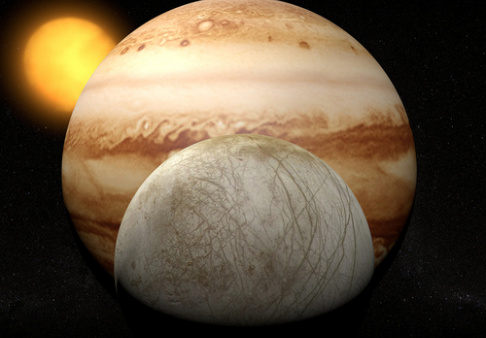 Jupiter’s moon Europa could be home to geysers but if so the natural engines that fuel them are unable to be detected.

Scientists have re-evaluated data from NASA’s Galileo mission in even more precise detail looking for regions on Europa that are warm enough to be connected to plumes of water vapour.

If hotspots exist on Europa, which contains a huge ocean of liquid water beneath its icy surface, they will most likely stay hidden until NASA’s Europa Clipper spacecraft arrives at Jupiter in the late 2020s or early 2030s, according to the researchers.

An exciting bit of news for Asgardia as they work toward creating a demilitarized and free scientific base of knowledge in space.

In 2016, scientists revealed the provisional detection of a faint plume on Europa via NASA’s Hubble Space Telescope. A second unconfirmed plume was also revealed the following year. Since then, the moon has remained quiet, and scientists have debated whether the features detected by the space telescope were actually caused by wafting water vapour.

In an attempt to answer this question, Julie Rathbun and her team turned to data gathered by Galileo when it orbited Jupiter in the 1990s and early 2000s. Rathbun is a senior scientist at the Planetary Science Institute in Tucson, Arizona. The researchers had scanned the moon for heat signals almost a ten years ago before the potential plumes were found. Now, they returned to study the two possible source regions more closely, seeking signs of heat that might indicate geological activity. Sadly, the results were less than encouraging.

As per Rathbun during a news conference held on Oct 22 at the American Astronomical Society’s annual Division for Planetary Sciences meeting in Knoxville, Tennessee, she confirmed that they didn’t see any hotspots at those locations.

Plumes are common throughout the solar system. Jupiter’s moon Io is constantly shooting volcanic material into the air. Saturn’s icy moon Enceladus famously blasts water vapour and other material from its subsurface ocean into space through a series of geysers near the south pole. And our own planet is home to many geysers, such as Yellowstone National Park’s Old Faithful or Iceland’s Great Geysir.

Firing off the gas that these plumes are composed of requires an energy source, which typically heats up the ground around the plume source. Enceladus, Io and Earth all have hotspots around their geysers and volcanoes.

But, as far as experts can tell that is not the case for Europa. Rathbun and her team saw no hotspots at either of the purported plume locations outlined in the data collected by Galileo.

There are four potential reasons why, said Rathbun. First, it’s possible that the Jets don’t exist. It’s also possible that the hotspots exist but are too faint to be detected by Galileo or the Earth-based Atacama Millimeter/Submillimeter Array (ALMA). Another possibility is that the plumes are sporadic and just didn’t fire off while Galileo was around. Lastly, Europa’s plumes may function differently from the geysers on other celestial bodies.

Both Europa and Enceladus are icy moons, and they are both thought to be home to a subsurface ocean. So, it’s not surprising that the planetary scientists based their Europa search on the geysers confirmed on Enceladus. The geysers from Saturn’s moon come from long, narrow “tiger-stripe” fissures with about the same area as that probed on Europa, and the expected temperatures are also similar.

However, there is the potential that Europa’s plume regions have a different configuration than those of Saturn’s moon.

What’s more, another issue is timing. Galileo studied Jupiter and its moons from 1995 to 2003, more than ten years before Hubble spotted the plumes. If Europa’s fountains are sporadic, their hosting sites may not yet have become active while Galileo was looking. Also, ALMA was looking at the moon several months after Hubble’s observations, possibly giving the area time to cool off.

Sunlight is also another complication. At the beach, sand and rocks heat up and cool at different rates based on what they are made of. After the plumes were first seen, ALMA detected a region near a young crater called Pwyll that seemed warmer than surrounding areas. But, Rathbun explained that Galileo showed that the same region is cooler than its environment on the nightside.

ALMA’s observations, like all those made from Earth, show only the moon’s day side. Rathbun said that the variations most likely originated from features with different makeups.

Ideally, the same tool would compare daytime and nighttime observations to rule out heat from the sun as an explanation for the temperature differences, but unfortunately, Galileo didn’t collect daytime images of this mysterious area.

Lastly, Rathbun stated the fourth possibility is that the plume-generating mechanism on Europa doesn’t heat things up the way familiar geyser features do. It’s presently unknown what kind of mechanism could do that, but she said the possibility can’t be eliminated.

While there isn’t enough information to determine which of the four explanations is closest to the reality of the situation, Rathbun said that her favourite option is number four.

Rathbun added that she’d love it if there’s something different going on.

Fortunately, Europa probably won’t be able to keep these secrets for much longer. NASA’s Europa Clipper spacecraft, which is presently set to launch in 2022, will make 45 flybys of Europa at altitudes ranging from 1,700 miles to 16 miles (2,700 kilometres to 25 km).

One of the instruments Clipper will feature is the Europa Thermal Emission Imaging System (E-THEMIS), a heat detector that will take thermal images of the moon at different wavelengths.

Thus, as Rathbun explained, if there is a hotspot somewhere on Europa, then E-THEMIS will see it.

If you can’t wait for the results of the Europa Thermal Emission Imaging System and are constantly fascinated by what’s going on in space then join Asgardia today and connect with forward-looking people.

The post The Europa Thermal Emission Imaging System Set to Launch in 2022 Might Solve Some Unanswered Mysteries appeared first on Asgardia.