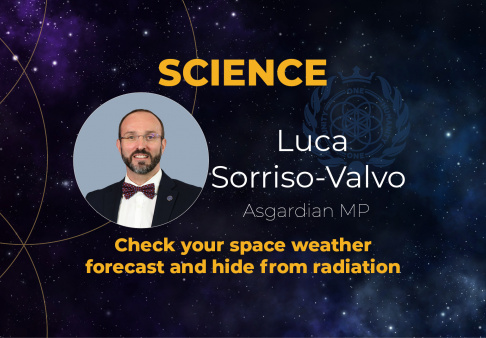 Luca Sorriso-Valvo is an Asgardian MP and Chairman of the Science Committee. He has been studying the solar wind, which is his passion, for the last 20 years. In his interview, he shares why it is crucial for  mankind to understand the solar wind.

First of all, why do you study the solar wind?

The fundamental driver is the human desire for knowledge. We study the solar wind because it is there, but of course, there are practical reasons for it. We need to know the medium in which our planet is embedded if we want to understand how it can affect us. There is a relatively young science, called space weather, that tries to understand and predict how the solar activity, mediated by the solar wind, affects the Earth. It may be disruptive and dangerous for humans and technology and we need to be able to control it.

The solar wind is made of plasma, basically a hot and rarefied gas of charged particles such as protons and electrons. We know a lot about plasma today, but not everything, in particular its turbulent and complex dynamics. Some 99% of the condensed matter in the universe is in the state of plasma: stars, galaxies, the interstellar medium. Furthermore, plasma is used in technological applications, from medical to industrial, and most importantly in the attempt to generate clean energy in nuclear fusion devices, just as it happens in the core of the sun and of the stars. Both astrophysical and fusion plasmas are hard to measure: the first ones are so far that we can only look at the light they emit, and the latter is so dense and hot that diagnostics are technologically challenging. The solar wind thus represents possibly the only way we can directly probe the plasma, by sending satellites to space and study it experimentally. Once we get the data, we can use that knowledge to interpret correctly the light from remote galaxies, or for engineering the next-generation fusion machine more efficiently.

How does the solar wind affect Earth and the near-Earth environment?

The solar wind blows from the Sun all the time, but its speed, density, magnetic field and pressure strongly fluctuate. When it hits our planet, in fact it impacts the region of space surrounding the Earth called magnetosphere, where the terrestrial magnetic field acts as a protective shield. The wind thus just blows around the magnetosphere, and its particles cannot reach the Earth. When a particularly strong event (for example the so-called coronal mass ejections, or solar flares) happens at the Sun and propagates in the interplanetary space hitting the Earth, the perturbation may be more severe and the terrestrial magnetic field can be shaken seriously. This means, for example, that a compass on Earth will have strong deviations and indicate random directions. It affects animals or human technology that rely on magnetic fields for orientation. Space weather events also modulate the number of cosmic rays – dangerous radiation in the form of high energy particles originating at the Sun or out of the solar system – reaching the Earth and regulate the ionospheric and magnetospheric currents system. This may result in a threat to space and communication technology, the safety of astronauts, airplane crews and passengers, it can affect pipelines or damage transformers and power plants, disrupt satellite communication, like GPS positioning and telecom.

Today we are able to predict severe space weather by looking at the solar activity and computing the expected time of arrival of the perturbation, which is usually around a couple of days. It is possible to put satellites on stand-by and send astronauts to special radiation-safe zones of the ISS. It is also believed that exposure to cosmic rays may cause DNA mutations potentially leading to evolution or extinction.

What role does the heliosphere play in the Solar System?

The Heliosphere is for the solar system what the magnetosphere is for the Earth: it shields it from interstellar plasma and cosmic rays, representing the primary protection from radiation of the whole interplanetary space. This magnetic bubble is as large as Pluto's orbit extending for more than 15 billion km radius around the Sun.

While powerful Solar storms are dangerous and affect our planet, do they also protect us from cosmic rays?

Every 11 years the solar magnetic activity oscillates between a maximum and a minimum. During high solar activity periods, the heliosphere is somewhat more powerful, with extended reach and stronger and more irregular magnetic fluctuation. In these conditions, the heliospheric deflection of extra-solar cosmic rays is at maximum, so there is in general less radiation hitting the Earth. On the contrary, during solar minimum the heliosphere is weaker and steadier, resulting in a larger flux of radiation on Earth. However, most of the magnetic storms are observed during high solar activity periods, so that the actual cosmic ray protection at the Earth surface may be more complicated to predict.

How much do we actually know about the environment our Sun creates around itself? What fundamental mysteries are out there?

The potential impact of solar activity on human society is so huge, that these studies have become a fundamental part of research worldwide. The ESA and NASA study it. Just recently, the NASA Parker Solar Probe and the ESA Solar Orbiter have been sent relatively close to the Sun, to collect measurements in a region of space still unexplored. There are currently plans to build an interstellar probe, which would reach the regions right out of the heliosphere, which is largely unknown except for the few data sent back by the two Voyagers.

Earth’s magnetic field protects us from Solar radiation. How can we protect our future settlements on Mars?

Unlike the Earth, Mars does not have a proper magnetosphere that shields it from the solar wind. There is however a tiny protective magnetosphere, simply due to the fact that the planet surface is conductive and the magnetized solar wind plasma cannot connect with it, for simple electromagnetic arguments. It has been found that the planet has strongly magnetized crust in some specific locations, which generate small, localized magneto-domes. With a large quantity of radiation hitting the surface, the Martian environment cannot host life as we know it. The solar wind particles have been swiping the martian atmosphere for millions or even billions of years. With no magnetic shield, the planet is almost completely exposed to solar events. Future settlements on Mars will have to be carefully designed to protect inhabitants and technology from radiation, solar UV, and X-ray emission and high-energy particles. These could be thick protective walls, artificial magnetic fields, underground habitats, or some other solution possibly still unknown.

How to protect Moon settlements from the Solar wind?

The Moon is not in a much better position. Being too small and with barely any inner circulation, it does not have its own magnetosphere. Because of its orbit, the Moon spends about half of its time in front of the Earth, out of the magnetosphere, which makes it fully immersed and exposed to the solar wind particles and magnetic field. The Moon has in the end similar issues as Mars in terms of necessary protection from external radiation and particles.

What happens if protection systems fail? Will astronauts suffer from acute radiation syndrome?

During storms, the risk of exposure is of course magnified, and therefore there are safety protocols onboard the ISS which include reaching a safe room where thick walls protect from radiation. But the major problem comes from continuous exposure, rather than from single events. During a typical 6-month mission on board the ISS, an astronaut would receive approximately the same amount of radiation as a Hiroshima survivor. If we talk about the Moon or Mars, or some space ark in the outer Earth orbit, then the exposure will be much larger. Out there, long-duration extreme radiation events might result in more severe consequences on astronauts, including tissue damage and radiation syndrome. This is particularly true if we consider a long-term space habitation.

You’ve recently become an Asgardian MP and is involved with the Science Committee of the first space nation. What was your motivation to join Asgardia?

Actually, I’ve been Asgardian for the last 4 years. I mentioned at the beginning of the interview that I have been working in space science for two decades, so this is my natural environment if I may say so. What can be more exciting than space after all! I am grateful I take part in drafting legislation for our nation that could allow progress in space exploration and habitation. Although I am passionate about solar wind I also give a deep thought to environmental issues. And I am doing my best to make sure we have a legislative system that has a focus on the environment. It should be one of the key priorities for Asgardia. The first space nation – which is also the first virtual, global, and multicultural nation - should be green and clean, it should serve as a good example for humanity.