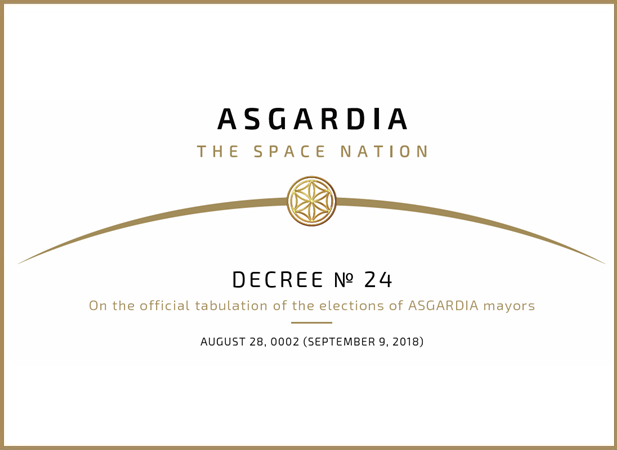 Congratulations to all Asgardians on the national holiday – Constitution Day.

Head of Nation declared the election stage of Asgardia city mayors that took place from August 1 (July 17) to September 9 (August 28) in accordance to Decree № 20 completed, in connection with which he:

1. Delegated Central Election Commission (CEC) together with the Administration to tabulate results of the mayoral elections by the second anniversary of the birthday of Asgardia, October 12, 2018 (October 5, 0002).

2. Until Parliament passes the Bill on the election of Asgardia mayors and other elections, to continue elections of Asgardia mayors in those Earth cities where mayors have not yet been elected and where there are no less 5 thousand people and no less than 100 Asgardians reside. Unions of cities with smaller populations are allowed.

3. The Administration together with the Parliament and elected mayors are to work through the matter of organizing flash mobs in the corresponding cities, while observing the local laws of the Earth states.

Decree No. 45 On the Appointment of Chief Advisors in Administration to the Head of Nation