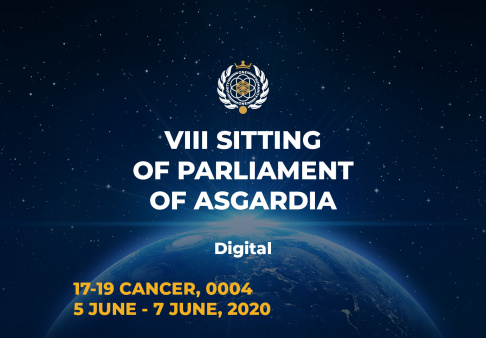 On Cancer 17-19, 0004 (June 5-7, 2020), Asgardia's Members of Parliament (AMPs) from all over the world gathered for their regular Digital Sitting to work on some key judiciary and economy legislation.

It's been a busy couple of days for Asgardia's Parliament during its VIII Sitting(VI Digital Sitting). Chairman of Parliament, Lembit Öpik, gave an extensive overview on the sitting, going through the legislation reviewed.

Asgardia has been around for just 3.5 years, but it’s making quick progress in designing the most mature legislation in the world.

These documents were presented and reviewed:

- proposal on Reformation of the Government

- on disqualification procedures for MPs

These Committees presented their reports:

Benjamin Dell, Deputy Chair Parliament, and Chair of Foreign Affairs Committee presented the National Currency Act to Parliament for its first official reading. It was first presented for discussion in the last Asgardia Legislative Forum (ALF), helping to determine the rules, regulations, and defining principles related to Asgardia's currency, Solar.

He updated Parliament on the changes made to the document and highlighted needed additions, emphasizing the reasoning behind the changes and how it adheres to the Constitution of Asgardia. He stressed the importance of moving this piece of legislation forward as it is one of the key pieces needed regarding Asgardia’s economy.

Asgardian MP and Chairman of the Justice Committee, Salvos Mouzakitis, presented the Judiciary Act for a second reading to Parliament. He highlighted some of the important changes made to each chapter of the Act in response to feedback by Parliament from the first reading.

He explained what wording had been adjusted to add clarification to the Judiciary Act, and a section was added to be compliant with the rights set in the Citizens Act of Rights which was adopted after the VII Sitting of Parliament that took place on Aries 3-5, 0004 (February 28 - March 1, 2020).

Supreme Justice of Asgardia, Yun Zhao, attended this parliamentary meeting in order to support this debate. He also spoke a few words about this legislation and fielded questions from parliament.

The Members of Parliament held an energetic discussion about the updates and wording of the Judiciary Act to ensure that there is unbiased and equal coverage of Asgardia’s legal system in relation to the digital Nation.

Head of Administration to the Head of Nation, Lena De Winne, presented the proposal of the Administration on the formation of the Government of Asgardia to Parliament.

An open selection for the positions of Ministers of the Government and its Chair was proposed.

Lena De Winne outlined the criteria that the Administration will look for in candidates. Those include full compliance with Article 34 of the Constitution of Asgardia and encourages Residents of Asgardia who are experts in their field to apply for the positions by submitting their CVs along with the proposals on how to operate respective Ministries. She then fielded questions from MPs about the proposal and encouraged Members of Parliament to engage with prospective candidates that they feel would be qualified for the Minister positions.

Member of Parliament and Executive Secretary of the Trade and Commerce Committee, Ismail Sengul, presented the National Bank Act to Parliament for debate. This was the first time this legislative document was discussed by Asgardia's MPs.

The purpose of the National Bank Act expands on Article 13.4 of the Constitution of Asgardia and is meant to regulate and supervise the banking and financial system, ensure and maintain public confidence in the financial markets, introduce the Solar as a convertible currency in the international market, and implement monetary policy to ensure economic growth and monetary stability.

Chairman of Parliament, Lembit Öpik, also shed light on the upcoming Parliament by-elections. They will run July 1 - Oct 31, 2020 — follow Asgardia News here and on social media to stay up to date.