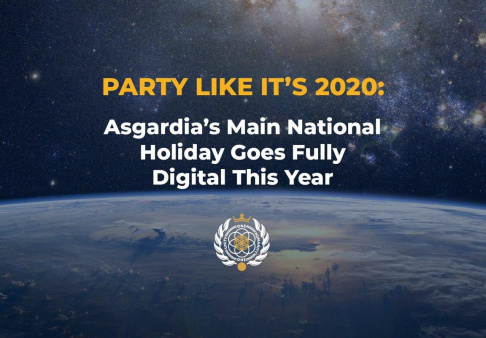 With the world more divided than ever, many international borders still closed due to a global pandemic, Asgardia stood united, in the spirit of Unity Day.

This holiday celebrates the day the first draft of Asgardia’s Constitution was presented — the day Asgardia gained one of its key staples as a Nation. This document is the basis of the Space Nation’s legislation and is a tribute to a better, united humankind.

Asgardia’s team, officials, and the community prepared a lot of surprises, including a holiday live broadcast with a Q&A session with the Head of Nation, messages from Asgardians and Asgardian officials, the international Asgardian Coat of Arms relay, unprecedented random giveaways, an online party on Discord, and much more.

Asgardia’s special Unity Day live stream June 17 on YouTube was broadcast in 9 of the 12 official languages of Asgardia and included:

A pop-up live Q&A with the Head of Nation

A session with Asgardian volunteers

Unity Day messages from the Asgardian community and MPs

A clip about Asgardia’s short, but rich history

A performance of out-of-this-world handpan music

In addition to the special Unity Day live stream, Asgardians held an international online Discord party, the team offered random giveaways as Unity Day gifts, and Asgardians from all corners of the globe sent the Nation’s Coat of Arms on a virtual world tour — watch its fascinating journey here.

As Head of Nation Dr Igor Ashurbeyli put it in the stream, ‘We are a digital Nation’ — so the online celebrations seem more than fitting. After all, how else would Asgardia celebrate its holidays when the Nation’s dream of living in space becomes a reality? The commute would be unimaginable, so Asgardia is already going as digital as possible today.

One humanity — one unity!