Spektr-RG Captures the Heart of the Milky Way 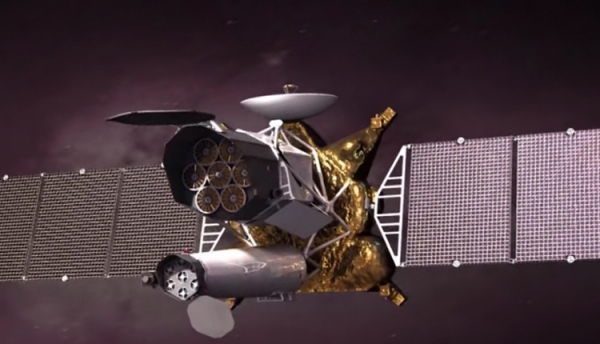 According to a recent discovery, the brightness of a super heavy black hole Sagittarius A* (aka Sgr A*) located in the heart of the Milky Way at a distance of 26,000 light years from Earth has dramatically increased, sparking a fair share of interest of the world’s scientific community. The Spektr-RG space observatory monitored Sgr A* and shared images confirming its soaring activity

The Spektr-RG observatory transmitted some shots to Earth reflecting a bright point, a super heavy black hole Sgr A* observed in the middle of the Milky Way galaxy. The photos were taken with the help of the ART-XC telescope set at Spektr-RG. The images show the galaxy core and a source of light illustrating the emanation of X-rays from the center of the Milky Way.

Regular stars do emit X-rays too, however, their richest source are the areas around black holes. Matter absorbed by the black hole gets twirled into a disc, compressed, and heat up to a very high temperature increasing the brightness around the black hole. Processes like that are mostly typical for super heavy black holes located in the hearts of galaxies and being millions of times heavier than the Sun (1,9885 х 1030 kg).

The Space Research Institute of the Russian Academy of Sciences experts are not ready to name the reason for the change of brightness in the black hole vicinity. 'We currently do work, perform data analysis, and avoid making any comments on the half-baked results we have,' Mikhail Pavlinsky, Dr. Sci. in Physics and Mathematics, explains.

Spectrum-X-Gamma (Spektr-RG) is an international Russian-German project focused on exploring the Universe in the X-ray spectrum for the purpose of putting together a 'map' of the visible part of the Universe to reflect all the major galaxy clusters, X-ray images of black holes, and neutron stars that are cooling down.

The Lavochkin Research and Production Association Spektr-RG observatory uses 2 telescopes: eROSITA made by The Max Planck Institute for Extraterrestrial Physics (Germany) and ART-XC developed by the Space Research Institute of the Russian Academy of Sciences and manufactured by the Russian Federal Nuclear Center.

Spektr-RG was launched to space on July 13 from the Baikonur cosmodrome. It is expected to be out there for 6.5 years performing its research mission: 4 years will be dedicated to eight full celestial sphere surveys and another 2.5 ones — to pinpoint surveillance over various objects in the Universe.