What Does an X-ray of the Universe Look Like? 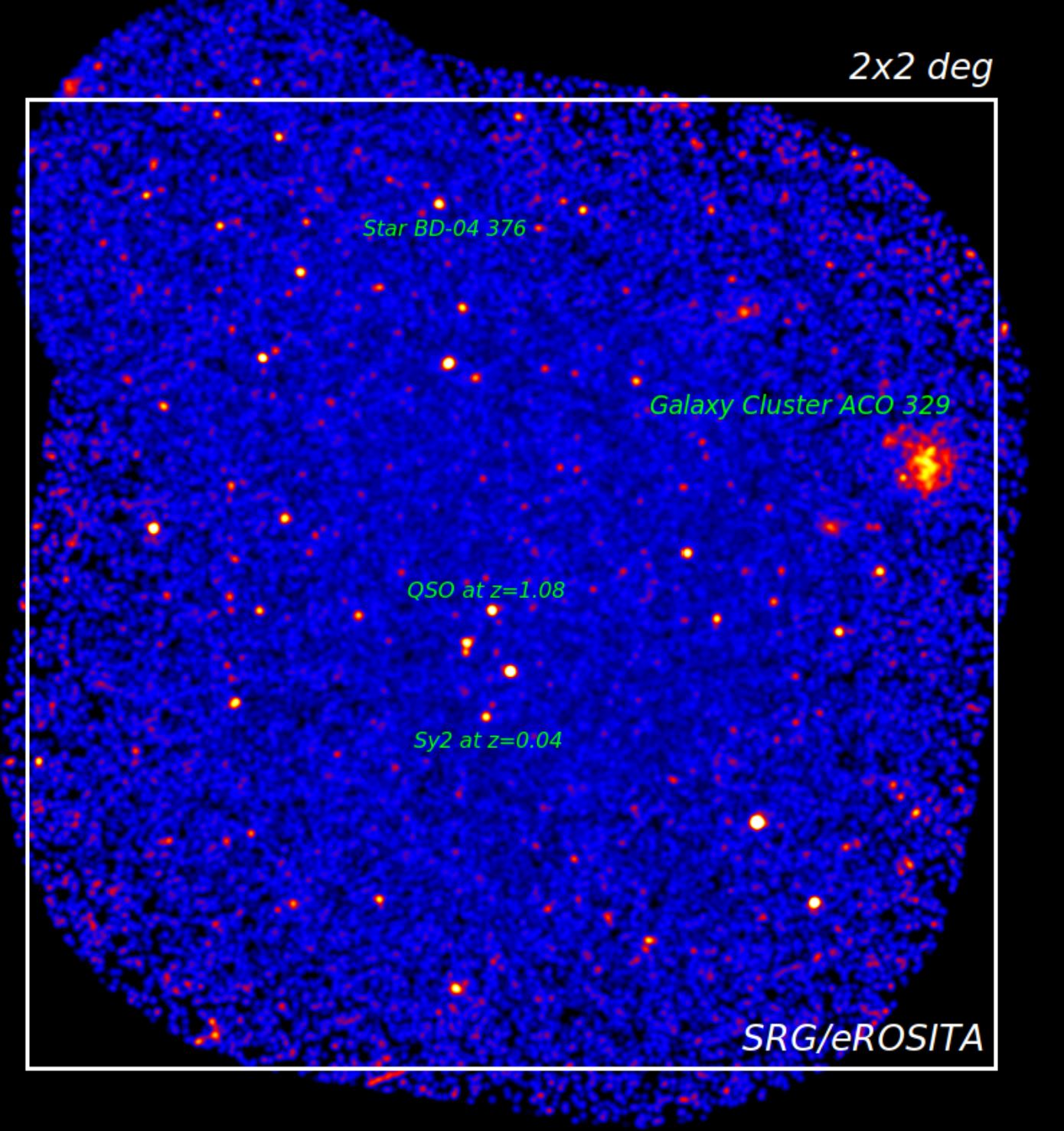 The Lavochkin Association (Khimki, Russia) shared the first X-ray image of a 2x2 degrees patch of the external sky as of August 26-27, 2019 captured by the eROSITA x-ray telescope on board the SRG (Spectrum-Roentgen-Gamma) orbital observatory. The 1x1 degree center of the picture, known as UDS (Ultra Deep Survey), reflects the results collected by all the seven telescope modules over a 6,000 second time span

The image shows hundreds of X-radiation sources, most of them being quasars bright enough to be visible through large interstellar distances. Those are supermassive black holes radiating thanks to matter giving out its gravitational energy as it gets swamped by those. Other celestial objects observed by eROSITA were identified as stars from our galaxy with bright X-ray coronae and active galactic nuclei not too far away from Earth. The intense diffuse spot in the upper-right corner is a massive cluster of galaxies (ACO 329) at redshift z = 0.139. Those are among the largest objects of the Universe. About 85% of their mass is unknown dark matter, and the remaining 15% is regular baryonic matter concentrated in hot intergalactic rarefied gas (reaching the temperature of tens of millions of degrees) and stars from thousands of galaxy clusters. This is exactly what the X-ray telescope was able to capture.

SRG awaits the other 6 eROSITA modules’ calibration and fine-tuning to be finalized to dive into research on billions of other X-ray sources all over the sky. The orbital observatory took off from Baikonur on July 13, 2019, and is currently by the L2 point of the Sun-Earth system 1.6 million km away from our planet. The mission is scheduled to be in space for 6.5 years, the first 4 of those allotted to sky-mapping following the path of ROSAT, Gaia, WMAP, and Planck observatories.

The entire sky is to be X-ray-mapped both in the soft (0.3-8 keV) and hard (4-20 keV) bands. Two unique supersensitive mirror telescopes Spectrum RG carries - the Russian ART-XC working at higher X-ray energies and the German eROSITA working at lower X-ray energies - are there to find 100 000 galaxy clusters, X-ray-active stars, multiple X-ray binary systems, and approximately 3 million accreting supermassive black holes. The survey is intended to be a 24/7 activity for the next 4 years.

The international research team, led by a RAS member Dr. Rashid Sunyaev, looks forward to accomplishing one of the most intriguing sky-scanning missions in history. ART-XC and eROSITA’s first images shared by the Russian Space Research Institute and ROSCOSMOS illustrate the impressive dimension of the project.