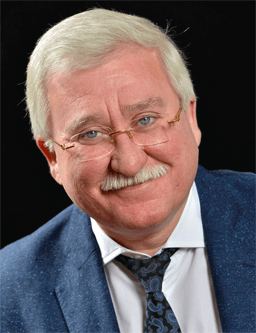 In 1988, he became the founder and first general manager (GM) of Socium - originally a small software and consulting company, now, a large holding company with over 10,000 employees worldwide. Socium’s slogan is “Per Socium Ad Astra,” which emphasizes the need for community and cooperation in humankind’s path towards the stars and exploration of space.

In 2010, he was awarded the State Science & Technology Prize for his achievements in the development and use of a new generation of micro-technology communications systems and controls for mobile air defense systems and critical facilities. The State Science & Technology Prize is the highest honor a Russian scientist can achieve. In 2016, he was awarded Gold UNESCO Medal "For contribution to the development of nanoscience and nanotechnologies”.

2004Chairman of the Board of the Nonprofit Non-Government Expert Society on Space Threat Defense (ESSTD), with has special consultative status with the United Nations Economic and Social Council (ECOSOC).

2001Gold Member of the Executive Committee of the Russo-British Chamber of Commerce, London, UK.

2011 - Present Chairman of the Board and Owner of Socium holding company.

2011 Resigned from all positions in Open Joint-Stock Company (OJSC) Scientific Production Association (SPA) Almaz; and from 2011 is no longer affiliated with any government structure.

2001 Professor and Department Chairman at Moscow Institute of Physics and Technology and Moscow State Institute of Radio Engineering, Electronics and Automation.

1994 Held positions of Deputy General Manager, First Deputy General Manager, and Chairman of the Board and Chief Executive Officer (CEO) at SPA Almaz (later rebranded as GSKB Almaz –Antey). From 2000 to 2011 was CEO of SPA Almaz (Note: Because SPA Almaz was rebranded as the OJSC State Special Design Bureau Almaz-Antey, the Russian abbreviation of this company GSKB Almaz –Antey should not be confused with JSC Concern Almaz-Antey. These are two different companies).

1994 Created and published the Russian Encyclopaedia of Information & Telecommunications.

1992 Co-founder of the International Bureau of Information and Telecommunications.

1992 Founder and Publisher of Who’s Who, a monthly newspaper in Baku.

1989 Vice-President of the Union of Cooperatives, a small business association of Azerbaijan.

1988 President of the Association of Scientific and Industrial-technical Enterprises of Azerbaijan (ASITEA).